The Golden Arches' biggest franchisee could post a big comeback.

McDonald's (MCD -0.77%) has been a standout stock for years. One of the best-known brands in the world, the Golden Arches' shares have returned more than 80 times their value from their early days in the 1970s. It's now a blue-chip stock -- one of only 30 on the Dow Jones Industrial Average -- and a vaunted dividend aristocrat, having paid increasing dividends for 40 years straight.

From 2012 to 2015, the stock stalled as same-store sales fluttered, but it surged last fall as some of new CEO Steve Easterbrook's changes began to take hold. With comparable sales now positive, a plan to boost cash flow by refranchising restaurants, and changes to bring the company's food supply in line with modern standards, the fast-food giant looks like it's back on the right track.

McDonald's offers a solid dividend yield at 3.1% and is expected to deliver EPS growth of about 10% this year and next, making it a promising choice for income investors. But investors looking for more potential growth might want to consider McDonald's biggest franchisee, Arcos Dorados (ARCO 1.52%).

Arcos Dorados was founded in 2007, and now has 2,100 restaurants across Latin America and the Caribbean with the exclusive right to open and operate in 20 countries and territories in the region. About half of its locations are in Brazil.

The company debuted on the stock market in 2011 to much fanfare, spiking on its IPO thanks to its McDonald's pedigree. However, the stock quickly turned negative after going public as Latin America was swept up in a recession caused by falling commodity prices. 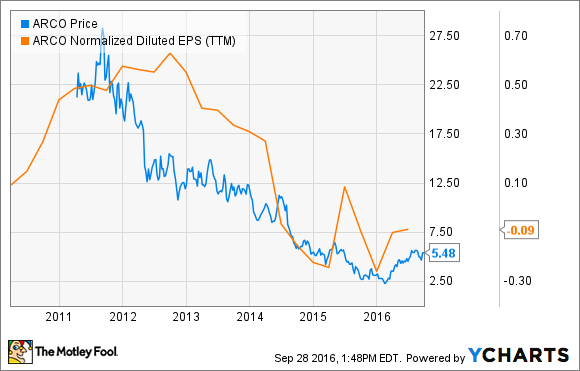 Shares of the franchisee have now more than doubled since their bottom earlier this year as the company has taken steps to shore up its finances and move toward profitability.

Over the past year, the company has refinanced its debt, helping to streamline its fixed cost structure, and begun selling and refranchising restaurants as part of its asset monetization plan to raise $250 million by the end of 2017 to pay down debt. Arcos Dorados has also slashed G&A costs, which have fallen by 25% this year, in part due to currency fluctuations.

The company's performance is already looking up as adjusted EBITDA grew 34.7% in its most recent quarter and earnings per share jumped seven times from $0.03 to $0.21.

The Latin American economy is continuing to swoon: Venezuela is in the midst of an unprecedented crisis, and currencies across the region are weak in the face of a strong dollar, pressuring Arcos' results, which are reported in US dollars. Meanwhile, the recession in Brazil continues. But the economy and currency fluctuations should eventually stabilize, and when they do investors will be left with a company much the same as it was when it IPOed in 2011 and investors paid $26 a share for it, even if its financial position is worse. With the McDonald's brand resurgent around the world, Arcos Dorados should eventually reap some of the benefit.

And even if the company continues to struggle, it's sitting on a valuable asset. At a market cap of about $1 billion, its restaurants are worth an average of about $500,000. McDonald's corporate, meanwhile, derives a value of about $3 million from its locations.

One way or another, Arcos Dorados stock should rise eventually. It remains risky, but for growth-seeking McDonald's investors, the payoff could be huge.

Jeremy Bowman has no position in any stocks mentioned. The Motley Fool owns shares of Arcos Dorados. We Fools may not all hold the same opinions, but we all believe that considering a diverse range of insights makes us better investors. The Motley Fool has a disclosure policy.