This bank has been the subject of major short attacks, but don't let yourself lose sight of what a great company this is.

Internet-based banking company BofI Holding, Inc. (AX 1.23%) has a lot of investors betting against it. In fact, as of September 27th, over 35% of the company's outstanding shares were sold short. While there are indeed some reasons to be cautious, here's why the short-selling might be a little overdone.

BofI (short for "Bank of Internet") is a holding company that operates BofI Federal Bank as well as a few other internet-based banking brands. The company has been in operation for 15 years, and has about $7.6 billion in assets. To compare that to a more familiar brick-and-mortar bank, BofI is approximately the same size as Mutual of Omaha Bank or Simmons Bank -- in other words, it isn't huge. Not yet, anyway.

Based in San Diego, California, the bank conducts all of its operations from a single location and has no branches whatsoever. The bank offers a full range of banking products, including checking and savings accounts, CDs, mortgages, auto loans, and other more  specialized products.

The bank's goal is to capitalize on the trend toward online and mobile banking to grow its deposit base, while maintaining a lower cost of operations than its peers by cutting out the need for physical branches. Transactions that take place in a branch cost 40 times as much as those that go through a call center, and about eight times as much as an ATM or online transaction, so the cost savings can be significant.

Why all the short-selling?

In a nutshell, over the past year, BofI has faced several accusations of wrongdoing, including but not limited to issuing loans to foreign criminals, forgery, and conspiring with an appraiser to overvalue properties. The list goes on, and my colleague has discussed BofI's issues at greater length in this article from January, as well as this more recent one.

Management has of course denied any wrongdoing, and in the time since all the accusations, the bank has passed several regulatory examinations and an independent investigation by a major law firm. And while the bank hasn't been completely exonerated of all the accusations, the lack of any findings by regulators and the pending motion to dismiss lead me to believe that the short-selling days are numbered.

I could write an entire article on the reasons to ignore the accusations against BofI (some have already been written), but I'd rather discuss all of the reasons to love the bank, especially as a long-term investment.

For starters, the company's growth in recent years has been nothing short of spectacular. Over the past year alone, BofI's assets have grown by 31%, and deposits have growth by nearly 36%. As a result, EPS grew by 18%. In fact, the company's diluted EPS has grown at a staggering 34% annualized rate over the past four years. The past year's $1.85 per share translates to a rock-bottom valuation of just 11.9 times TTM earnings. 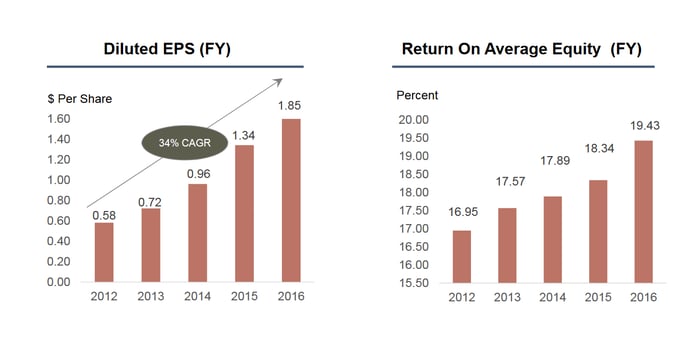 Additionally, the bank has successfully transitioned away from CD deposits toward a checking and savings account-based portfolio. Over the past three years, BofI's checking account deposits have grown by 537%, and savings deposits have nearly quadrupled as well. 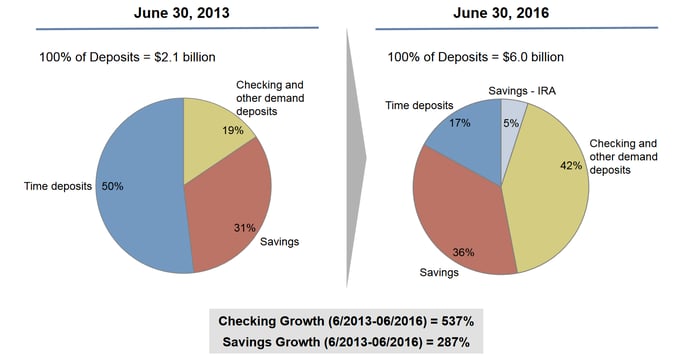 And even though the loan portfolio has grown at a double-digit growth rate (29% last year), it has done so responsibly. Just to name one example, the bank's largest type of loan is single-family residential, and the average single-family loan has a loan-to-value of just 58% (the industry standard is to originate mortgages with an 80% LTV). BofI has non-accrual and net charge-off ratios that are well below the industry average, as you can see in the graphic below. 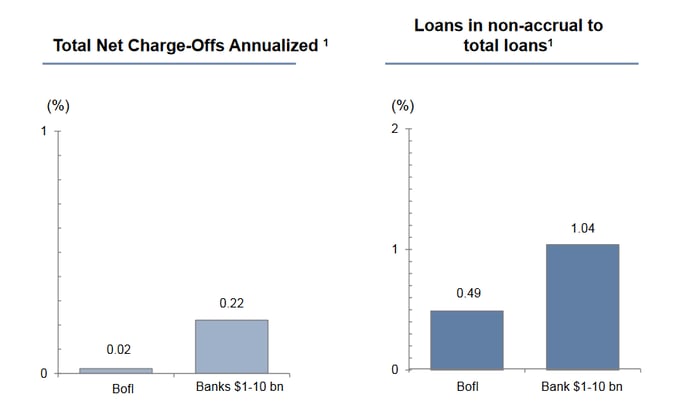 As of the most recent quarterly report, BofI held just under $36 million in loan loss reserves, equal to about 0.57% of the entire loan portfolio. In other words, if all of the non-accrual loans ended up defaulting, the bank would have it covered with the existing reserves.

Finally, because of its branch-free structure, BofI simply crushes the competition when it comes to efficiency -- and, as a result, profitability. Just take a look at how the bank's expenses compare to other banks with similar asset sizes.

As a result of these expense savings, BofI has managed to produce some of the best profitability metrics in the industry, despite the seemingly never-ending low-interest environment.

In other words, BofI is more efficient than all but 4% of U.S. banks, and as a result, produces about three times the profitability of the average bank. And it trades for a low valuation despite all of this.

Like most new and innovative companies, BofI is not a low-risk stock by any means. Investors should be prepared for some significant volatility in the years ahead. However, at this point it seems like the upside potential more than makes up for the downside risk of owning the stock, and as a shareholder myself, I'm excited to see what the future holds for the bank.