According to reports, OPEC is slamming the breaks on its aim to control a greater share of the oil market. Instead, the cartel has agreed to cap its output at 32.5 million barrels a day, which is down from its current production of more than 33 million barrels a day. It is doing so to not only put a floor under oil prices but to remove the current overhang of crude in the market, which has been keeping prices down. If the deal comes to fruition, it would be great news for top shale producers because they just need oil to stabilize a bit higher than current levels to drive significant growth going forward. Three oil stocks, in particular, stand out as potential big winners.

The shale king will reign supreme

EOG Resources (NYSE:EOG) spent the past two years holding back production growth not only due to the weak market conditions but so that it could improve its drilling returns. The net result was that the company built a significant inventory of premium wells, which it defines as delivering a 30% after-tax rate of return at $40 oil. In fact, it now has a 6,000-well inventory in place.

Because of that, the company recently announced that it was ready to go back to growth mode in 2017. The company said that it expected to deliver "significant production growth with balanced cash flow from 2017 through 2020, even in a moderate commodity price environment." Under its plan, the company could deliver 10% compound annual oil production growth through 2020 at flat $50 oil, with the growth rate accelerating to 20% at flat $60 oil. Even better, as a result of significant improvements and innovations over the past few years, the returns on those wells are projected to be 60% at $50 oil and over 100% at $60 oil.

OPEC's intervention makes it much more likely that oil will stay above at least $50 a barrel over the next few years. We only need to look back into history for evidence of this. In late 2001, for example, OPEC agreed to cut its production by 1.5 million barrels per day in a bid to boost prices. Here's what happened to crude over the following three years: 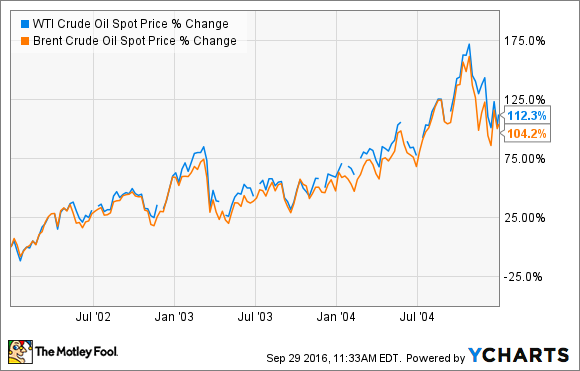 Thanks to its premium drilling inventory, EOG Resources does not need a repeat of that oil-price rebound to be successful.

Repositioned and ready to soar

Devon Energy (NYSE:DVN) spent the past year repositioning its business to restart production growth once oil prices stabilized. The company sold more than $3 billion of noncore assets to pay for a multibillion-dollar acquisition and bolster its balance sheet. As a result of that shift, the company has a much-stronger balance sheet and sports a portfolio to drive robust growth going forward.

While Devon Energy has not put out its oil growth forecast just yet, it has an inventory of more than 10,000 wells that can deliver 30%-plus after-tax rates of return at $50 oil. In addition, as a result of its recent asset sales, the company has not only reduced its net debt by 45%, but it has more than $4.6 billion in cash to accelerate drilling when the time is right. That's a lot of cash for a company that needed to spend just $1.3 billion this year to keep its production flat.

Fully loaded and ready to go

Concho Resources (NYSE:CXO), like both Devon and EOG Resources, spent the past couple of years getting ready for the eventual oil-market rebound. It significantly reduced its costs so that it can also drill high-return wells at $50-plus oil. Also, Concho Resources opportunistically acquired additional drilling acreage, recently paying $1.625 billion for prime land in the Midland Basin. Overall, the company now controls more than 18,000 future drilling locations in the Permian Basin.

As a result of all this, Concho Resources plans to restart production growth next year. The company's initial plan is to grow its oil production by more than 20% while still living within cash flow. It could accelerate that growth rate if OPEC's intervention leads to higher oil prices.

While EOG Resources, Devon Energy, and Concho Resources did not need OPEC to intervene in the oil market, they will certainly take it. That is because the intervention should stabilize the market and drive prices higher, which could enable these producers to earn even better returns. As a result, these three energy stocks should thrive as the oil market begins to improve.