Royal Gold, Inc.'s (NASDAQ:RGLD) biggest mine investment was in trouble. The company moved aggressively to deal with the problem, resulting in a fix that should work out well for Royal Gold, its mining partner, and, just as important, its shareholders. The transaction the streaming company helped to engineer shows just how important this normally overlooked part of Royal Gold's business is to shareholders.

A big mine with big trouble

The Mount Milligan mine accounts for 24% of Royal Gold's reserves and made up roughly a third of its revenues in the recently ended fiscal year. It's not unusual for a streaming company to have a small handful of large mines -- Silver Wheaton (NYSE:WPM), for example, gets about 22% of its precious metals revenues from a single mine, and around 50% of sales are derived from just three mines.

However, when a company's most important asset is being run by a miner facing financial troubles, the risks get a little more worrisome. And that's exactly what was happening with Mount Milligan. Thompson Creek, which operates the mine, had a market cap of roughly $110 million and debt of around $900 million earlier this year. A third of that debt was set to mature in a year or two. It was a precarious situation and one that some industry watchers feared would lead Thompson Creek into bankruptcy -- a potentially bad outcome for Royal Gold. What to do? 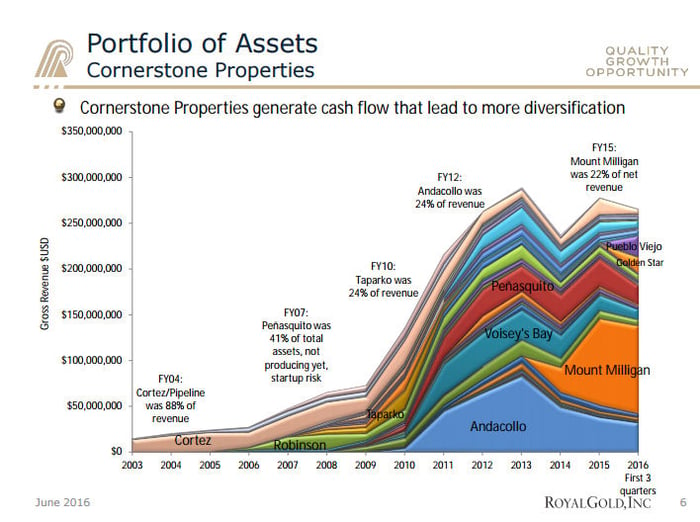 Royal Gold's business really breaks down into two parts: investing in mines via streaming and royalty deals and then managing the portfolio of mines the company has built. The first half of that gets most of the attention because it's the most exciting. This makes sense because new deals are how Royal Gold grows its business.

Managing the portfolio is, well, kind of boring most of the time. That's a good thing. But Mount Milligan was a different situation: It was a key asset run by a troubled operator. Portfolio management suddenly became a big issue, and ultimately it was Royal Gold's best performing business segment so far in 2016.

That's because Royal Gold stepped up to the plate and started looking for ways to help. In fact, the streaming company described itself as a "catalyst," talking to miners, private equity shops, and investment firms to help solidify Thompson Creek's financial position. And Royal Gold was open to some aggressive changes to its existing deal.

Which is exactly what it took to entice Centerra Gold (NYSE:CAGDF) to step in and buy Thompson Creek for around $1.1 billion. The purchase price includes the payoff of Thompson Creek's debt, meaning that Royal Gold's $780 million investment in Mount Milligan wasn't going to turn into a weight around the streaming company's neck. 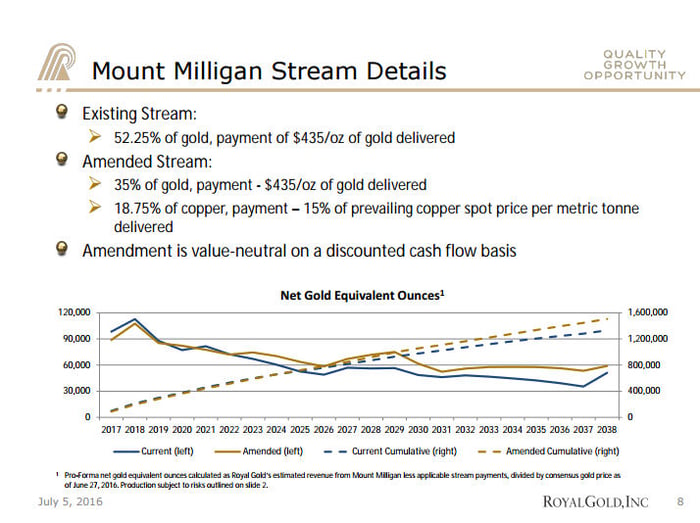 A summary of the changes at Mount Milligan. Image source: Royal Gold.

The big change that made all of this happen was Royal Gold's being willing to drop its 52.25% gold streaming interest at Mount Milligan to 35%. In exchange, it will get an 18.75% copper stream. Royal Gold's gold costs will remain $435 per ounce of gold, and it will pay 15% of the spot price per metric tonne of copper. The expected impact for Royal Gold should be a wash over the long term.

The bigger picture here, however, is that Royal Gold's willingness to work with its partners made a huge difference in the outcome. The management of its portfolio -- which most investors likely don't think much about -- helped to preserve the value of one of the company's biggest assets. The importance of this can't be overstated enough because owning a collection of streaming and royalty deals sounds pretty simple on the surface. It seems like streaming companies just sit around and collect gold and silver.

But the truth is far more complex. Not every asset is a winner, and every asset goes through different stages. For example, as a mine ages, Royal Gold might consider selling its stream to another player so it can invest in a newer mine with a longer reserve life. Just like working with Centerra and Thompson Creek, it's part of managing a portfolio of mines.