Please ensure Javascript is enabled for purposes of website accessibility
Log In Help Join The Motley Fool
Free Article Join Over 1 Million Premium Members And Get More In-Depth Stock Guidance and Research
By Reuben Gregg Brewer – Sep 29, 2016 at 9:44AM

Teck Resources Ltd (TECK -0.24%) focuses on three main commodities: coal, copper, and zinc. None of these has been a great business of late, but if you watch the news, you might think coal in particular was destined for the dustbin. That's not true, and here's why coal was probably Teck Resources Ltd's best business segment in 2016 so far.

If you read the news headlines, you would come away thinking that coal is a dirty fuel being replaced by alternative power sources. That's true to a great extent in the thermal coal market, but not as much in the metallurgical coal sector. Met, or steelmaking, coal is still a vital product. Sure, it's facing headwinds, but nothing like what thermal coal is dealing with. Teck gets roughly 35% of its cash operating profit from metallurgical coal and none from thermal.

The main problem for met coal has been oversupply pushing prices lower. For example, year over year in the second quarter, Teck's realized price for coal was down 8%. And it sold roughly 3% fewer tons of the steelmaking input in the quarter, too. Profits in the coal group were down about 8%. That all sounds pretty bad.

But not so much when you compare it to copper, which also makes up around 35% of the company's business. The realized price for copper was off 22% in the second quarter. Copper volume was down around 5%. And gross profit was off 35%. Zinc, which makes up around 30% of Teck's cash operating profit, had mixed sales: Zinc prices were off by 13%, and the group's profits were off by 8%. Compared to those two businesses, coal held up pretty well in the quarter.

So that's just one half of the equation. The other piece is that met coal is actually looking better now than it did earlier in the year. For example, coal prices moved up roughly 5% between the first and second quarter. Copper and zinc both saw improvements, too, so this alone isn't the whole story, but it's a nice supporting trend.

The other big reason that met coal is the best performing unit has to do with costs. Teck was able to drop the total cost of mining met coal by a massive 19% year over year in the second quarter. The improvement was 15% in the first quarter. Copper, by comparison, saw a year-over-year cost improvement of 13% in the second quarter after matching coal's cost cuts in the first quarter. 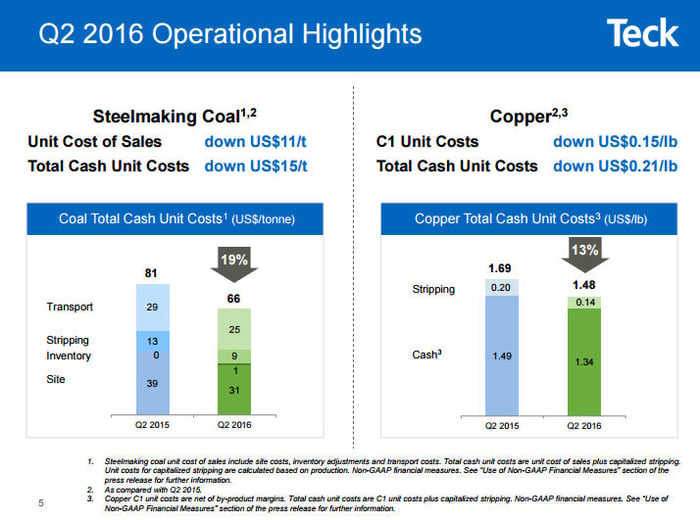 To be fair, coal has probably been one of the biggest problems for Teck in recent years. So it makes sense that the most aggressive actions have taken place in the segment. However, with steep cost cuts, improving prices, and an underlying business that's holding up a little better than copper and zinc, coal really does end up looking like the best business in Teck's portfolio so far this year.

More to be done

That said, Teck's coal business is hardly out of the woods yet. The steel industry is still faced with a material oversupply. And steel companies are increasingly looking for alternatives to met to keep their costs down. For example, U.S. steel giant Nucor (NUE -1.33%) has built a pair of direct reduced iron ore plants. Such facilities reduce the need for met coal. That, in turn, could change the demand dynamics that companies like Teck have built their businesses around. Nucor, by the way, is already one of the largest users of electric arc furnaces, which use scrap metal instead of iron ore. It's the older blast furnaces, which are increasingly being shut down in favor of newer electric arc technology, that make the most use of metallurgical coal.

Such risks aside, coal is still Teck Resources Ltd's best business segment in 2016 so far. And it's worth keeping a close eye on the division to see if the improving met coal price trend continues. If it does, all the work on cost-cutting will pay off in spades. That, in turn, could easily turn met coal into Teck's best-performing business for all of 2016!

Reuben Brewer owns shares of Nucor. The Motley Fool recommends Nucor. Try any of our Foolish newsletter services free for 30 days. We Fools may not all hold the same opinions, but we all believe that considering a diverse range of insights makes us better investors. The Motley Fool has a disclosure policy.