Waiting for data is never easy.

Today's move seems to be a continuation of yesterday. The momentum down shouldn't come as much of a surprise. Just look at the upward movement Exelixis' stock has experienced since the approval of its kidney cancer drug Cabometyx in April. 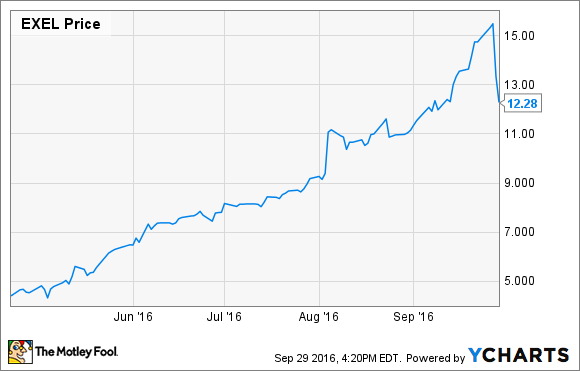 Despite the massive increase since approval, there hasn't been much data that changes Exelixis' valuation since the approval. In August, the biotech released sales numbers for the first nine weeks Cabometyx was on the market, but even that increase looks like a small blip on the above chart despite actually representing a one-day 18% increase in shares.

Given investors' propensity to hit the buy button despite the lack of information on the expectation that Exelixis will be able to move into first-line kidney cancer patients, it shouldn't come as much of a surprise that investors are hitting the sell button at the first sign that the picture might not be as rosy as it could be.

We already know that CABOSUN, a clinical trial testing Cabometyx against Pfizer's (PFE -0.02%) Sutent in first-line kidney cancer, showed that Cabometyx was superior to Sutent. But details of the trial, including by how much Cabometyx beat Pfizer's drug, have been kept under wraps prior to a scientific meeting: the European Society for Medical Oncology (ESMO) meeting next month.

The issue has become how much of that first-line indication Cabometyx can capture given the potential of the combination of Pfizer's Inlyta and Merck's Keytruda in kidney cancer, which appears to be working in the same setting, according to an ESMO abstract released yesterday. Of course, that data comes from an uncontrolled phase 1b trial, so it will remain unclear how the two treatments might work in a head-to-head competition even after Exelixis is given the opportunity to present the CABOSUN data at ESMO.

Investors hate seeing shares of their companies go down for apparently little reason, but they never seem to mind it when shares increase for the same reason (or lack thereof). Long-term investors should strap in for the ride, because it could continue to be a bumpy between now and October 10, when the CABOSUN data is presented at ESMO.

Brian Orelli has no position in any stocks mentioned. The Motley Fool owns shares of and recommends Exelixis. We Fools may not all hold the same opinions, but we all believe that considering a diverse range of insights makes us better investors. The Motley Fool has a disclosure policy.