What Smart Sand does and why it’s confident enough to go public in the oil industry in this climate. 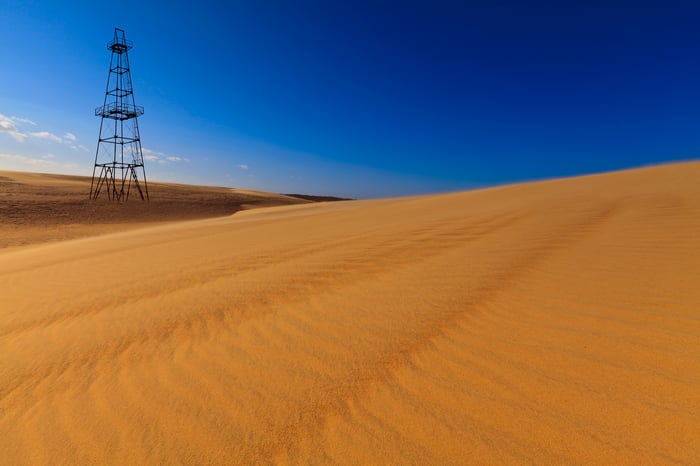 Last week, rather than just the usual deaths and declines, the oil industry actually saw a filing for an initial public offering.

In this clip from Industry Focus: Energy, Sean O'Reilly and Taylor Muckerman explain where Smart Sand comes from, what it does, and how the company already pretty much has the fracking industry wrapped around its little finger. Also, the hosts talk about how Smart Sand compares to its peers, how much growth the fracking sand space has seen recently, and some significant risks investors should consider before buying in.

Sean O'Reilly: The energy sector is getting an IPO! What's going on?

Taylor Muckerman: Yeah! It's not a bankruptcy, it's a birth!

O'Reilly: This is amazing to me.

Muckerman: We're adding to the crop rather than subtracting.

O'Reilly: So, Woodlands-based company that produces sand for hydraulic fracturing plans to go public. You sent this over kind of like an "LOL" kind of thing, but then we were like, "Wow, this is actually a big deal! What does this mean?"

Muckerman: The LOL was just the fact that an energy company is going public right now. Not so much this particular business.

O'Reilly: Yeah. We talked about that company that IPO'd a year and a half ago, the Permian player. It is what it is. Why are these guys going public right now?

Muckerman: I mean, when you look at what's happening in the U.S. with shale production, natural gas, and oil, sand has been a major driver of the ability to extract these tight oil and natural gas reserves, because after you inject the water and fracture these wells, the sand has been used as a proppant to keep those fissures open, enough for oil and natural gas to flow through. And you've seen the level of sand used in these wells rise dramatically.

O'Reilly: As I understand, sand has been a really big component in the last couple years, as these companies became more and more efficient.

Muckerman: Yeah, you're looking at millions of tons of sand used on an annual basis, millions of pounds used per well. EOG (EOG -0.97%) said they're using 700% more sand per well than they were in 2010.

Muckerman: 700%. And that's the largest independent U.S. producer. That's moving the needle. This isn't some tiny little regional mom-and-pop shop. This is the largest U.S. independent oil and gas producer, 700% in six years.

Muckerman: Yeah. And you look at companies that are averaging around 8-11 million pounds per horizontal well, across the board.

O'Reilly: So, "Smart Sand operates" -- I'm just reading from the article you sent me -- "two white sand processing sites in Wisconsin with a combined 344 million tons of proven recoverable" -- there's that word again.

Muckerman: Yeah, proven, just like oil, that's the best kind of reserve, proven. Then you have probable, and then you have possible.

Muckerman: Yeah. That might be a couple years' worth. Maybe the year, for the entire industry.

O'Reilly: So, these guys are not large.

Muckerman: No, they're not. They have competitors that are somewhat larger. But when talking about their sites being in Wisconsin, some of the focus on other players has been to find more regional sand, so, Texas, Arkansas, places that are going to be cheaper to transport it to these major basins. Wisconsin, obviously closer than Texas to North Dakota.

O'Reilly: Are they putting all this sand on the back of trains and sending it to Texas?

Muckerman: Yeah, they are. They're loading up these trains. That's exactly what they're doing, sending this sand south from Wisconsin.

O'Reilly: "Look, Mommy! That train has a bunch of sand!"

Muckerman: You have a couple other players: U.S. Silica (SLCA 4.11%), Hi-Crush Partners (HCRS.Q), those might be two of the biggest in the industry. And then, CARBO Ceramics (CRR) is a proppant producer, but they make their own silica proppants, so they're not necessarily a sand miner. But they were the industry darling during the peak of this fracking, because you could create custom pellets, basically, to optimize the well. But when you look at pure sand plays, you're looking at U.S. Silica, Hi-Crush Partners, and possibly Smart Sand, as they IPO fairly soon.

O'Reilly: Have you considered these names possible ways to play the oil industry without being an actual producer? Because it sounds like they need the sand.

Muckerman: Yeah. They do. And they're talking about... Credit Suisse had a report on this saying that they expect demand to go up 50% in 2017 for frack sand. And then, even with the depressed rig count, they're going to need that much or more than they were needing in 2014, which was the peak of fracking and rig count. So, yeah, you're looking at more sand per well. The fact that wells aren't being drilled at the same alarming rate, sand is still needed. U.S. Silica's stock has more than doubled this year.

Muckerman: Impressive. A very leveraged play, because they're selling sand strictly to frackers.

O'Reilly: Those guys go under, game over.

Muckerman: Yeah. Fracking cuts back again, then these guys are hosed, again.

O'Reilly: But on the other hand, more sand is being used per well, so that's something, too.