Third generation Oasis power plant arrays from SunPower. The image shows space between arrays that could be used to grow crops and the flexibility of using multiple panels. Image source: the author.

Solar farms have long been code for utility scale solar in the public lexicon, but solar and farming have never really been combined in any meaningful way. That may finally be about to change. SunPower's (NASDAQ:SPWR) third generation Oasis design allows enough space between rows of solar arrays to drive a tractor, meaning a farmer could plant crops or animals could use the land for pasture, making solar farms a dual use facility.

This is another small differentiator for SunPower that it hopes will give it a small advantage over developers like First Solar (NASDAQ:FSLR) and SolarCity (NASDAQ:SCTY.DL), particularly in community solar. And with margins already thin in the solar industry it may be a key differentiator going forward.

The new Oasis power plant design isn't just about farming. It's meant to increase energy production on each acre of land and allow for solar power plants on a wider range of sites. The arrays are half as long as the previous generation, but they're twice as wide (seen above as two panels aligned lengthwise), packing the same power generation into each array. This added width spaces rows out farther, allowing a small tractor to drive between the arrays.

The shorter arrays also negate the need to build roads between arrays because trucks can simply drive down each row. This helps allow 33% more megawatts of production to be packed into each site.

Another advantage of the new design is that it's unlinked, meaning each array isn't tied to the next. In previous designs, a single motor ran multiple arrays, meaning they had to be linked by a bar that turned more than a dozen arrays at a time. Walking down a row was difficult as a result of this linkage and driving down it was impossible. Now, tractors, trucks, or even cattle can freely roam the solar farm.

SunPower isn't the only one updating its power plant designs to improve costs for large solar power plants. First Solar's Series 5 power plant is moving to a medium voltage architecture that's ready to add energy storage. SolarCity hasn't yet come out with a power plant design, but it has big goals for community solar markets that will provide more energy flexibility to customers, and that's an area to watch right now. What's unique about SunPower is that it's trying to pack more utility on each acre of land while increasing power production. 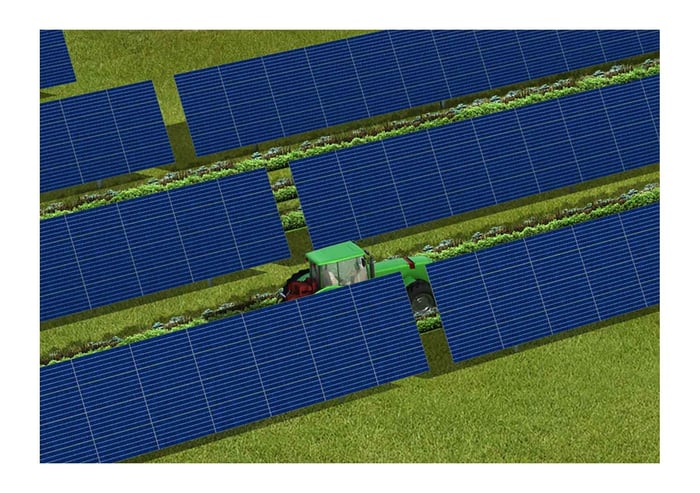 Community solar farms could be a big opportunity

Up until now, most of the large solar power plants built in the U.S. have been located in hot, dry regions of California, Arizona, and Nevada. In these locations the combination of solar and farming isn't really necessary or feasible.

But the growth of community solar in states like Minnesota, Massachussetts, and Colorado -- which are expected to be three of the top four community solar states (along with California) over the next two years -- may put a new focus on solar plus farming. Any additional revenue a solar power plant can get is a positive and crops could be a significant stream of revenue in many cases.

In Minnesota, rent for cropland can be $270 per acre and a solar power plant needs about four acres per megawatt of power production. So, even if rent would be lower than average because fewer crops could be planted there's an incremental revenue benefit of maybe 1% or 2% for a solar farm from being able to produce crops. That's a small advantage a plant may have over competitors in bidding for projects.

Another differentiator in solar energy

The difference between being able to plant crops in a solar farm or not is small, but it's an incremental improvement that SunPower hopes will give it a financial advantage building projects in the future. And it's the incremental improvements that will lead to significant advantages long-term. First Solar is looking for those advantages where its thin-film technology works best and SolarCity will likely try to leverage its relationship with Tesla to offer differentiation.

With Oasis, SunPower is picking off small improvements across the entire development process. It's designing plants with drones to save engineering costs, packing more power production onto each acre, has cleaning robots that reduce maintenance costs, and now can bring farming into the fold. On their own, each one of these improvements wouldn't be noteworthy, but combined SunPower thinks it can show a 15% improvement on the cost of solar energy. And that could make the company's power plants more compelling at a time when competition in the solar industry is fierce.