Many automakers and analysts believe that driverless cars could hit public roads within the next decade. As hype for this fledgling market has spread, the valuations of many stocks linked to driverless cars have rallied to frothy levels. 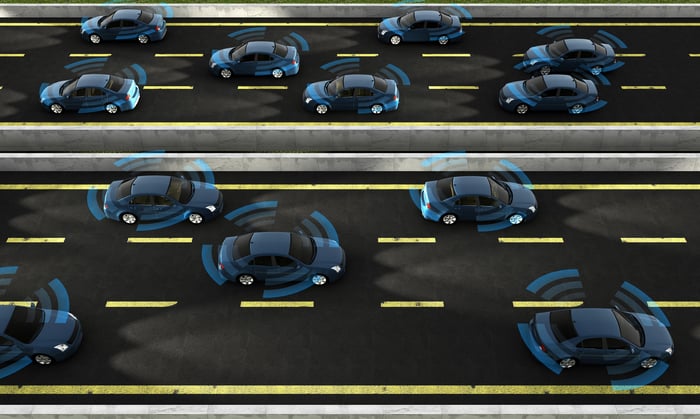 Mobileye (NYSE:MBLY), which provides 90% of the world's top automakers with accident avoidance systems, trades at 109 times earnings. Nvidia (NASDAQ:NVDA), which generates an increasing amount of revenue from automotive chips for infotainment, navigation, and autonomous driving, trades at 44 times earnings.

Dutch chipmaker NXP became the world's largest maker of automotive chips after it acquired Freescale last year. Last quarter, 36% of its sales came from automotive chips, 49% came from various secure interface and identification chips (including NFC chips used in smartphones), and the rest came from its older discrete, logic, and PowerMOS chips. NXP is currently divesting those older businesses for about $2.75 billion.

However, NXP recently launched BlueBox, a turnkey platform that enables automakers to produce driverless cars. The platform is similar to Nvidia's Drive PX, but NXP's strength in automotive chips gives it the ability to create cheaper bundles to win over cost-conscious automakers. Therefore, the rise of autonomous cars could significantly boost NXP's automotive revenues over the next few years.

Many investors have avoided NXP due to a cyclical decline in auto sales, weakening sales of smartphones, and Brexit-induced worries about European companies. As a result, NXP trades at 28 times earnings and 11 times forward earnings, which is fairly cheap compared to its estimated earnings growth of 28% next year. Analysts expect NXP to grow its annual earnings at an average rate of 27% over the next five years, which gives it a 5-year PEG ratio of 0.5. Since a PEG ratio under 1 is considered undervalued, NXP looks very cheap relative to its long-term growth potential.

The 800-pound gorilla in auto parts

Delphi, one of the world's largest auto parts makers, has also been investing heavily in autonomous vehicles. The company has tested various autonomous vehicles on public roads and its driverless tech powered an Audi vehicle on a cross-country trip last year. Delphi also recently partnered with Mobileye to build a fully autonomous vehicle system by 2019.

Delphi sells ADAS (advanced driver assistance systems) and autonomous solutions through its electronics and safety unit. Revenue from that unit rose 9% annually last quarter and accounted for 18% of its top line. That growth complemented its 15% sales growth in electrical/electronic architecture sales while offsetting a 2% sales decline from its Powertrain systems. As a result, Delphi's total sales rose 9% for the quarter. Analysts expect Delphi's sales and earnings to respectively rise 6% and 12% next year.

Despite those sound numbers, the market isn't bullish on Delphi thanks to weak auto sales. That's why the stock only trades at 15 times trailing earnings and 11 times forward earnings. Analysts currently expect Delphi to grow its annual earnings at an average rate of 13% over the next five years, which also gives it an undervalued PEG ratio of 0.9. And unlike NXP, Delphi pays a dividend which translates to a forward yield of 1.7%.

While many tech and auto analysts have hailed driverless cars as the next big thing, investors should take those forecasts with a grain of salt. A recent Kelley Blue Book survey found that 51% of U.S. residents still preferred to manually control their vehicles, even if they were less safe than autonomous ones. Several accidents between autonomous cars and human drivers also indicate that public roads probably won't be entirely safe unless all vehicles are computer-controlled.

Therefore, automaker forecasts for autonomous cars might be too optimistic. But if the technology is eventually accepted by the mainstream public, it would definitely generate fresh streams of revenue for companies like NXP and Delphi.