If you're thinking about buying or holding Bank of America's (NYSE:BAC) stock, there are three things to keep in mind: it's cheap, heavily traded, and its dividend is on the rise.

Experienced bank investors tend to value bank stocks based off book value -- i.e., the amount of equity that common stockholders have in the bank. The specific metric to use is the price-to-book-value ratio, which compares a bank's share price to its book value per share.

There is no hard-and-fast rule when it comes to bank valuations. This is because they tend to fluctuate with the business cycle. 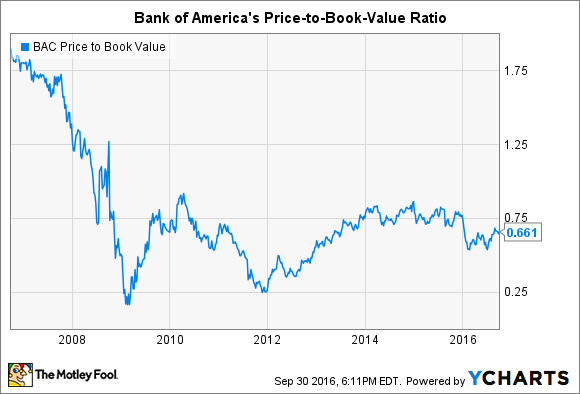 The best way to judge a specific bank's valuation is thus to compare it to its peers. By doing so, you can see how cheap Bank of America's shares seem to be.

While the average blue chip bank stock (i.e., member of the KBW Bank Index) is valued at 1.15 times book value -- a 15% premium to book value -- shares of Bank of America trade for a 34% discount to book value.

One of the downsides to owning Bank of America's shares is that they're especially volatile. If you're somebody who doesn't like your stock holdings to fluctuate significantly in price, then this isn't the stock for you.

The net result is that Bank of America's shares tend to fluctuate in price more significantly than other blue chip stocks. To this end, the $2.2 trillion bank's beta, which compares a particular stock's volatility to the market as a whole, implies that it's 67% more volatile than the broader market.

This is a strike against Bank of America for investors looking for stability.

3. A low, but rising, dividend

Current and prospective investors in Bank of America should also take note of its dividend. The bigger the dividend, generally speaking, the better suited it is for an investor in or approaching retirement.

In Bank of America's case, while it used to pay a generous dividend, that changed during the financial crisis, when it was forced to cut its quarterly payout to only $0.01 a share in order to preserve capital and placate industry regulators.

Since the crisis, moreover, Bank of America has run into issues on multiple stress tests, stymieing its desire to boost its payout on an annual basis. The net result is that the bank currently pays one of the lowest yields among large-cap bank stocks. 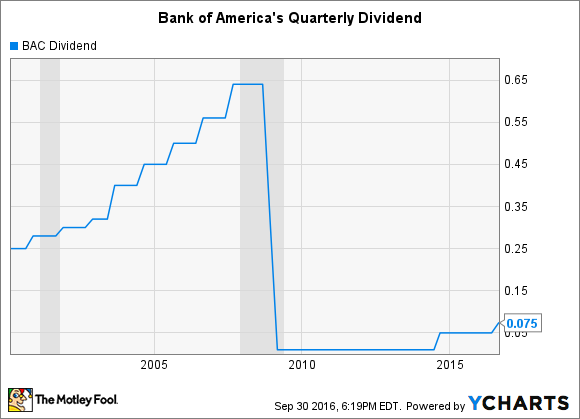 Fortunately, investors can be confident that the bank is committed to bolstering its dividend in the years ahead. And you don't have to just take my word for it. Soon after taking over as CEO of Bank of America, Brian Moynihan said that his plan was to eventually return the vast majority of the bank's earnings to shareholders via dividends and buybacks.

This almost necessarily means that Bank of America's dividend will be on the ascent for many years to come.