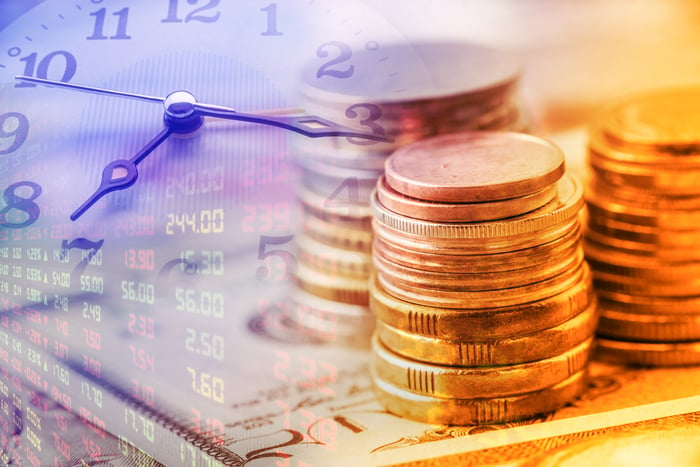 Many investors are attracted to technology companies primarily due to the prospect of significant, and relatively rapid, share price appreciation. However, there are also many investors that like the idea of investing in tech companies -- particularly ones that are poised to deliver reasonable amounts of revenue and profit growth in the years ahead -- that provide a steady (and growing) income stream in the form of dividends.

In this column, I'd like to highlight three tech stocks that pay significant dividends and are well positioned to increase those dividends at a consistent clip over time.

Microprocessor giant Intel (NASDAQ:INTC) currently pays a dividend of $0.26 per quarter, or $1.04 per share on an annual basis. For a while, Intel was a name that was known for offering a relatively high dividend yield – often to the tune of 4% -- but the company's share price appreciation over the last couple of years has brought it down to a smaller, though still quite respectable, 2.79%.

Further, Intel is well positioned to grow its dividend payments out in time. Though some income seekers may have felt "burned" when Intel failed to raise its dividend in 2013 and 2014, the company's business performance has stabilized and is actually back on a growth path. As a result, the company delivered solid dividend increases in 2015 and again in 2016.

In time, I expect that the company's attempts to stabilize its core personal computer chip business while looking to other markets (data center, non-volatile memory, and Internet of Things) for growth will allow it to deliver steady revenue and profit growth. As long as that strategy works out, Intel should be able to deliver consistent, reliable, and worthwhile dividend increases to its shareholders.

Microsoft (NASDAQ:MSFT) is a household name in the world of technology stocks. Its Windows operating system powers the majority of personal computers, its Office suite of productivity software is extremely popular, it is one of the three major game console vendors, and its cloud and server software businesses have also been doing extremely well.

The company currently pays a quarterly dividend of $0.39 per share (and that figure has grown consistently over the last several years), which works out to $1.56 per share on an annualized basis. As of this writing, this represents a dividend yield of around 2.72%.

Generally speaking, dividends and other capital return programs are funded by a company's free cash flow, and Microsoft is a cash generating machine. Over the last twelve months, Microsoft generated nearly $25 billion in free cash flow, or approximately $3.21 per share.

This means that even if Microsoft doesn't grow the amount of free cash flow that it generates from here (though I do expect Microsoft to continue to grow), it's well positioned to continue to deliver meaningful dividend increases for years to come.

Apple (NASDAQ:AAPL) only relatively recently restarted its capital return program, but the company's efforts here have been quite aggressive. Though Apple seems to favor aggressive buybacks to aggressive dividends, the company currently pays a quarterly dividend of $0.57 per share ($2.28 per share on an annualized basis), working out to a dividend yield of 2.07%.

Although Apple's business is expected to dip in the current fiscal year, analysts generally expect a rebound in both revenue and earnings per share in the company's coming fiscal year. Additionally, Apple's current dividend on an annualized basis represents just a fraction of the free cash flow per share that the company has been able to generate year-in and year-out.

There's little doubt in my mind that, barring a "black swan" event that completely wreaks havoc on Apple's business, the iDevice maker will be able to increase its dividend for many years to come.