Many investors prefer established large-cap businesses in the consumer-goods sector because they come with an attractive combination of growth potential and financial stability. Walt Disney (NYSE:DIS) and Coca-Cola (NYSE:KO) are titans of their respective fields, well-known household names with decades of strong operating history.

Both companies are in a state of transition these days. Disney faces upheaval in the increasingly competitive digital entertainment industry, and Coca-Cola's customers are becoming more health-conscious with every passing day.

Let's take a closer look at these two consumer-friendly giants. Which one seems more likely to turn its turbulent industry conditions into an opportunity, building long-term value for shareholders?

Since Coke doesn't produce family-friendly entertainment and Disney isn't producing carbonated beverages, this is not exactly an apples-to-apples comparison. Given the widely different capital structures and financial expectations of their respective sectors, it doesn't make a whole lot of sense to use industry-specific metric for this comparison.

Turning to cash-centric data points instead, we can get some sense of how richly valued Disney and Coke shares might be in relation to one another.

For example, we can weigh the stocks according to their enterprise value over EBITDA profits. Here, we're using an approximation of true cash profits and measuring that against the company's total price tag in an imagined buyout scenario.

From that angle, Disney looks downright cheap. The House of Mouse is valued at 9.4 times trailing EBITDA profits, while Coke's tally stands at 17.3.

Both stocks have seen some hard times lately. Disney's shares have taken a 9.8% haircut over the past 52 weeks while Coca-Cola gained 4.8%. They missed out on 11% gains in the major stock market indices.

Meanwhile, Disney's cash profits are surging, while Coke is moving in the opposite direction: 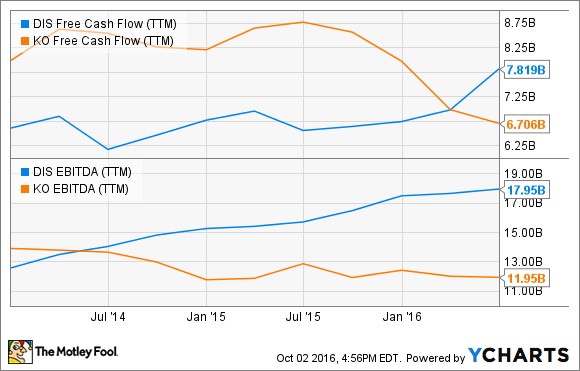 The valuation gap boils down to which stock investors have a better grip of.

Coke is essentially a simple business based on high-quality manufacturing and distribution of a widely wanted product line. Market makers have seen consumer habits changing before, and they expect Coca-Cola to survive this makeover as well. The company can retool its global distribution networks to manage less of its sugary flagship drinks in favor of bottled water and energy drinks, and this too shall pass. Coca-Cola will survive, and the stock is unlikely to plunge very far from changing industry conditions.

That's not true for Disney. Traditional movie theaters and cable networks are facing huge challenges from all-digital entertainment alternatives, and investors worry that Disney's soaring bottom line might come crashing down. There are major risks here, but Disney is well equipped to manage the digital era.

Disney's core product is high-quality entertainment. Whether its child-friendly fare is presented on the silver screen, through digital streaming services, via DVD and Blu-ray discs, or on VHS tapes, the real business doesn't change. It's just another medium, and Disney will find a way to take advantage of whatever technologies might come along.

In the end, Disney's shares come with a large discount for business risks. And like Coke, the company should sail right into the new era with its sails largely unruffled.

Overall, we're looking at two fine businesses in the midst of tackling some new challenges to their business models. Both seem likely to survive just fine and should continue to reward long-term shareholders over the coming decades. There are really no bad choices here.

But Disney is priced like a failure, despite its strong brand and surging cash flows. That's a severe misunderstanding. You should take advantage of this temporary discount while it lasts, because Walt Disney will keep producing cash as long as consumers are interested in superb entertainment.

And that, I think, will always be true.