On Monday, Facebook (NASDAQ:FB) took a cue from the success of the increasing popularity of community marketplaces in Facebook Groups. The company announced a new platform made specifically for buying and selling, called Marketplace. 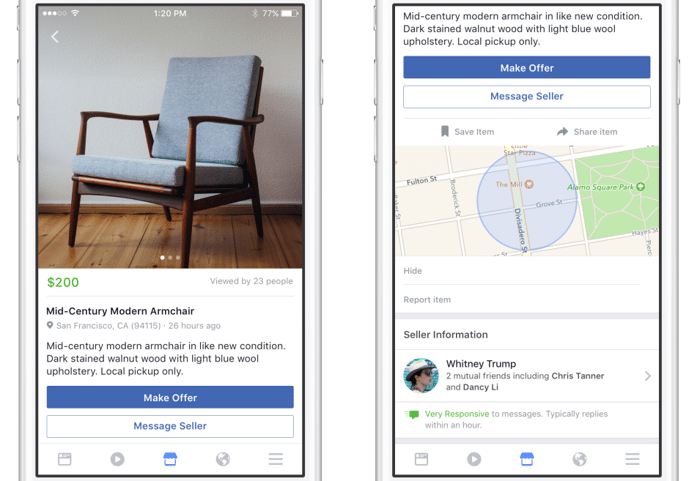 Over 450 million people have already been buying and selling in Facebook groups every month the company said in a press release. So it's far from a new idea for Facebook to help facilitate buying and selling on its platform. But having a specific social product within the Facebook app with its own dedicated shop icon clearly indicates an invigorated commitment to make Facebook a go-to destination for community commerce.

"To help people make more of these connections, today we're introducing Marketplace, a convenient destination to discover, buy and sell items with people in your community," Facebook director of product management Mary Ku said in its press release. "Marketplace makes it easy to find new things you'll love, and find a new home for the things you're ready to part with."

Marketplace features large photos of items for sale near users' locations where users can search for items by specific names, location, category, and price. Buyers can maker offers, message sellers, and view a seller's profile and general location. And sellers can quickly post items by adding a photo, describing the product, confirming their location, selecting a category, and posting.

Given Facebook's track record with rolling out new aspects of its service and eventually monetizing them, it's promising to see Facebook taking community marketplaces seriously. But there won't be any near-term benefits for Facebook's business as the company hasn't appeared to roll out any features for monetizing the service yet. Longer term, however, Facebook could easily monetize Marketplace by including ads from local businesses, or by facilitating transactions and charging a fee for the sale, akin to eBay's approach.

Emphasizing organic interactions before monetizing the product is in line with Facebook's patient but proven formula for turning social products into businesses:

Facebook was sure to emphasize in its press release that change should be expected. Going forward, Facebook said it will "continue to build new options and features to make this the best experience for people."

Perhaps the biggest hint Facebook likely plans to turn Marketplace into a meaningful part of the Facebook app's experience is the prominent location of the Marketplace icon. Giving the app such key real estate suggests the company wants Marketplace to be an integral part of Facebook users' everyday experience.

With 450 million monthly active users already buying and selling products from their local communities within Facebook Groups, it may not take long before Marketplace reaches the scale needed for Facebook to begin monetizing it. But investors shouldn't expect Facebook to hurry this business opportunity along. The company will likely maintain its patient approach to monetization, which Facebook has proved it has down to a science.