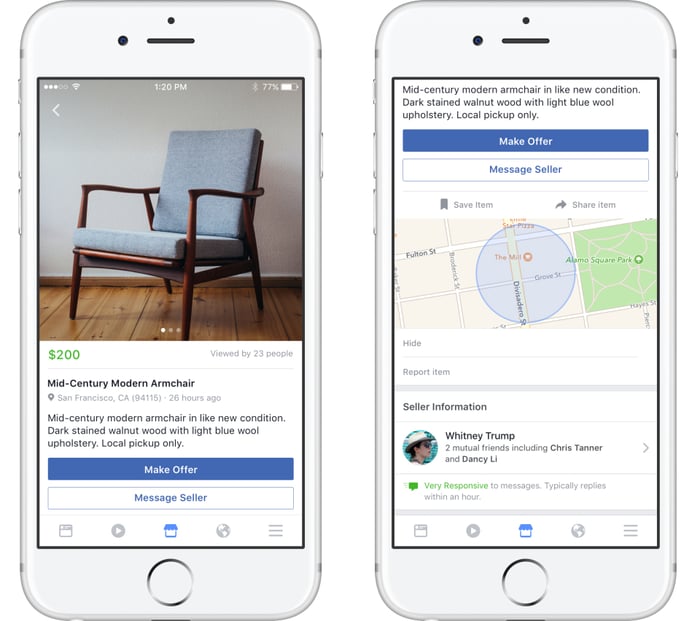 Facebook (NASDAQ:FB) says that over 450 million people connect on Facebook to buy and sell things locally. Most of these interactions occur within Facebook Groups, but the company now wants to broaden the appeal by creating a listing system. People can search for items by filtering for things like location, category, or price.

Marketplace will initially launch in the U.S., U.K., Australia, and New Zealand for users that are over 18 years old. It will be accessible via a button in the main Facebok app.

Like other classified services, Facebook is not participating in payment or delivery; it's simply connecting the buyer and seller. As such, there is also no mention of Facebook getting a cut of the sale, either. While some investors may think this is an overlooked monetization opportunity, it's actually probably for the best.

If Facebook tried to monetize Marketplace with a listing fee or commission, or attempted to provide payment or delivery services, it would be taking a lot more responsibility for the transaction. That opens up all sorts of liability in terms of fraud and consumer safety, among other issues. By merely providing a listing service, Facebook is taking a conservative approach while still hoping to increase user engagement.

Marketplace transactions may very well be safer than Craigslist, thanks to Facebook's real-name policy. Presumably, Facebook will also keep track of some data to provide to law enforcement, should a used-couch deal go sideways.

This actually isn't the first time that Facebook has tried this. In 2007, Facebook launched a classifieds listing service called...Marketplace. The main differences are that the first go-round was almost a decade ago, and it was primarily intended for desktop usage. With the mobile revolution largely occurring ever since 2007, it makes more sense to integrate a second attempt into the mobile app. It's far easier to take pictures of items directly on a phone while also using the phone's location data to create a listing, and 92% of Facebook's monthly active users (MAUs) regularly access the service on a mobile device.

As it stands, Facebook may end up competing more with Craigslist than it does with eBay (NASDAQ:EBAY). eBay shares opened 4% lower this morning following Facebook's announcement, as eBay remains the top destination for used products, despite its best efforts to expand into new items. Throughout the day, shares had mostly pared those losses.

It's true that some sellers could save on fees by listing in Facebook Marketplace locally, but that probably has a relatively modest impact on eBay merchants. Most eBay merchants sell outside of their local areas, and value eBay's guarantees, protections, and payment services quite a bit. That's especially true for eBay's high-volume sellers. eBay has little to worry about, despite the knee-jerk reaction.