The embattled biotech Celldex Therapeutics, Inc. (NASDAQ:CLDX) may seem like a compelling bargain at the moment in light of its diverse oncology-oriented pipeline, and meager market cap of $382 million. Even so, the market has shown far more interest in the cancer specialists Ariad Pharmaceuticals (NASDAQ: ARIA) and Exelixis (NASDAQ:EXEL) over the last 12 months, and perhaps for good reason: 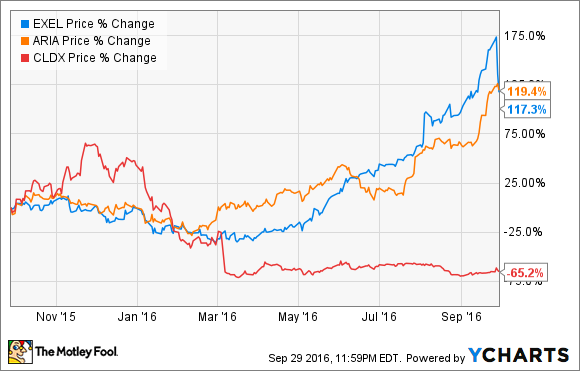 Let's take a deeper look to find out why.

Ariad's buyout chances are heating up

It's no secret that Ariad's management has been trying to fetch a reasonable offer for the company for a while now and that they stepped up their efforts to find a buyer after the company's flagship blood cancer drug Iclusig exhibited a tendency to increase the risk of serious blood-clotting events, resulting in a stricter label.

Despite what seems like tepid interest from potential buyers in the past, Ariad may, in fact, now be a viable buyout candidate for three reasons. First off, the biotech recently shored up its balance sheet by signing a European licensing deal with Incyte Corp. for Iclusig in return for $140 million upfront, potential milestone payments, and royalties on future sales.

Next up, Ariad could be headed for a successful regulatory filing for its second-line ALK+ non-small cell lung cancer (NSCLC) drug candidate brigatinib in the first half of 2017. Although this second-line indication won't be a major value driver for the company, Ariad is pursuing a front-line indication for brigatinib in ALK+ NSCLC that has the potential to drive sales into the multibillion-dollar range.

The third leg of the story is the current M&A environment. Big pharma and blue chip biotechs have shown an express interest in acquiring oncology companies of all shapes and sizes this year, and many companies are absolutely flush with cash to pursue a variety of targets. Moreover, bigger companies have been more than willing to take on debt in this era of record-low interest rates to flesh out their oncology pipelines and product portfolios. So, if Ariad does add a second product to its rare cancer drug portfolio via brigatinib, the company could certainly garner some interest in this M&A-conducive environment.

Exelixis stock has been tearing higher over the last year on a second regulatory approval for its tyrosine kinase inhibitor cabozantinib (brand names: Cabometyx and Cometriq) in second-line kidney cancer, along with a green light from the FDA for its advanced melanoma treatment Cotellic that was co-developed with cancer giant Roche.

Now, the company and its shareholders are eagerly awaiting cabozantinib's pivotal stage readout in advanced liver cancer that should take place sometime in 2017. The good news is that cabozantinib recently cleared the first interim analysis in its advanced liver cancer trial, allowing the trial to proceed to its second interim analysis scheduled to take place when 75% of the planned 621 events occur for the primary endpoint of overall survival. Before then, however, investors will get a more detailed look at cabozantinib's mid-stage trial dubbed CABOSUN for the treatment of front-line treatment for kidney cancer via an upcoming presentation at the European Society for Medical Oncology meeting on Oct. 10.

Putting these exciting clinical catalysts aside for the moment, the big-picture issue is that Exelixis' top line is forecast to grow by over 400% over the course of 2016 to 2017 because of these positive regulatory developments for cabozantinib and Cotellic, respectively. And as an added bonus, some analysts even think that the company's growth could be high enough to propel it into cash-flow-positive territory within the next year, which would be a major accomplishment for a biotech with a robust clinical pipeline that's making inroads on multiple fronts right now.

Is it time to buy these two cancer specialists?

Ariad and Exelixis are both far less risky cancer plays than Celldex based on the simple fact that each of these companies has filed a successful regulatory application and is now generating revenue. But that doesn't necessarily mean they are screaming buys after doubling over the last year. After all, Ariad and Exelixis both appear to be trading at somewhat stretched valuations at the moment, relative to their near-term growth prospects, meaning that it would probably require a buyout offer to push their stocks much higher in the near term -- and that's never a solid reason to buy a stock.

Having said that, Ariad and Exelixis do offer some intriguing growth scenarios in the years ahead based on the prospects of their respective clinical pipelines, perhaps making them worthwhile buys for investors willing to take the long view.