The third-quarter earnings report from McCormick & Company, Incorporated (NYSE:MKC) , released Sept. 30, saw the spices and seasonings specialist raise its full-year financial forecast on the back of a good set of numbers. McCormick is always going to have a lot of moving parts in its earnings, so it's a good idea to look at the numbers behind the headlines. 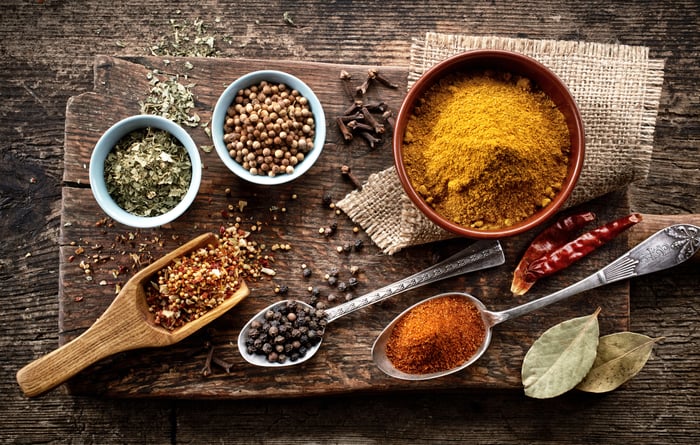 Before diving into the numbers, it's worth remembering that McCormick's management releases its headline sales figures and guidance on a reported and currency-adjusted basis, but not on an organic basis (that is, also adjusted for acquisitions). This approach tends to flatter the company's growth rate.

A look at the sales figures for the third quarter show two interesting things. 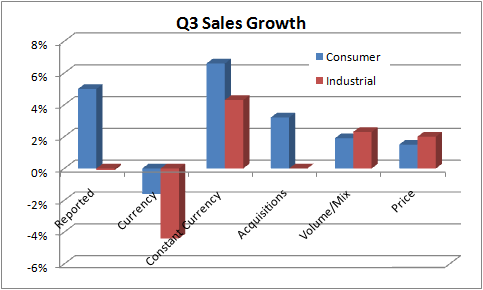 Second, both segments managed to increase volumes and pricing in the quarter -- a good result that indicates that the company has pricing power.

All told, it was a pretty solid sales performance in the quarter, and margin expansion led to an adjusted operating income increase of 12% in the quarter, as gross profit margin expanded to 41.6%, compared with 39.8% in the same quarter last year. In addition, the company's productivity efforts are bearing fruit. "Led by our Comprehensive Continuous Improvement program, we expect to achieve cost savings of $100 million to $110 million in 2016," said CEO Lawrence Kurzius in a press release. That figure represents about 2.4% of McCormick's trailing sales of around $4.34 billion.

According to CFO Mike Smith on the earnings call, the guidance hike is due to "the favorable third-quarter results, partially offset by the effect of currency on our income from unconsolidated operations, a lower reduction of shares outstanding, and the rise of vanilla and garlic."

On a regional basis, the consumer segment produced a varied set of results. When adjusted for currency and acquisitions, consumer sales for the Americas were up 4.2%. It's an impressive result in any case, but as analysts and management outlined on the earnings call, the spices and seasonings category is very strong in the U.S. right now.

In fact, independent data suggest that McCormick's market share declined. Kurzius put this change down to disruptions resulting from the shift from conventional spices to new organic spices. Putting that issue aside, Kurzius said, "We'd essentially be flat on market share."

Europe was less impressive, with Europe, Middle East, and Africa (EMEA) sales rising just 0.1% when adjusted for currency and acquisitions. Meanwhile, currency- and acquisition-adjusted sales increased 4% in the Asia/Pacific region, with management citing a 6-percentage-point reduction because of discontinuing certain low-margin products in India

While the consumer segment grabbed the headlines, the industrial segment's performance was arguably more impressive. Constant-currency sales grew 4.3% in the quarter in the Americas, driven by "strong sales of U.S. branded food service products and wins with new restaurant customers."

In contrast to the consumer segment's performance in EMEA, McCormick's constant-currency industrial EMEA sales grew 5.1%, while Asia/Pacific constant-currency sales grew only 2.6%, held back in China by a large customer's decision to procure product from a secondary source.

It was a good set of results, and investors should warm to the guidance raise. As the company closes the year, investors will want to see the company regaining market share with U.S. consumer sales, as the new organic sales line gains traction. Meanwhile, investors will want to see the industrial segment continue its impressive run in EMEA and the Americas while regaining traction in China.