I know, I know -- I bring this up every year. But that's because Apple, Inc.'s (NASDAQ:AAPL) ongoing practice of numbered iPhones gets more and more ridiculous every year. It used to kind of make a little bit of sense -- sort of. It started with the iPhone 4, which was actually the fourth-generation iPhone that Apple made. But over time and several iterations of Apple's borrowed tick-tock S cycles, it got out of hand. Quickly.

Apple developed a habit of changing the numbering every other year, when it introduced iPhones with new industrial designs. In between those years, it appended S on for iterative spec bumps (S initially stood for "speed" back in 2009). 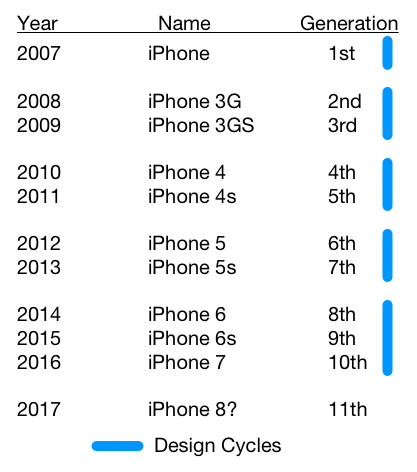 That would have normally presented a dilemma for 2016, since for the first time this year's model used the same overall design for the third year running. But since "iPhone 6SS" is just plain absurd, Apple went ahead and added a number. But what does Apple do next year, when it is expected introduce a redesigned iPhone that is potentially made of glass and features a wraparound OLED display?

The Apple media has already started casually referring to the 2017 iPhone as the iPhone 8, but Patently Apple has spotted some fresh evidence that Apple may indeed go this route. Apple has filed for a couple of figurative 8 trademarks in different countries, stylizing an 8 using the recognizable activity rings from Apple Watch.

Apple does use this icon to represent activity sharing, which is a big part of the social push for Apple Watch, but there is also some speculation that Apple will use this icon to stylize iPhone 8 next year.

It's not a matter of if, but when

There should be no question that Apple must get away from the numbers eventually. I really hope we're not still having this conversation in five years, if Apple releases the iPhone 10 in 2021, the 15th-generation iPhone. If we accept that inevitability, then Apple should transition to a more sustainable branding system sooner rather than later.

The iPhone SE has no number associated with it, which is progress. Apple is seemingly doing away with numbers in the iPad family as well, with the recent iPad Pros being denoted partially in the same way as Macs (display size). Apple needs to just shift to the same system that it uses in the Mac, identifying models by display size and year.

Will Apple, Inc. Ever Give Up on Numbered iPhones? @themotleyfool #stocks $AAPL Next Article
Current