A Model S outside of Tesla's factory. Image source: The Motley Fool.

Tesla Motors (NASDAQ:TSLA) has some huge growth targets. This year, for instance, it plans to deliver about 79,000 vehicles -- up about 56% from prior-year vehicle deliveries. Even more ambitiously, Tesla expects to produce 500,000 vehicles in 2018 alone with the help of its 2017-slated Model 3.

The problem with these targets, of course, is that many investors simply have a hard time believing them. The growth required to hit them is downright enormous.

But Tesla's bigger-than-expected third-quarter deliveries, announced over the weekend, may help mitigate some concerns about the company's ability to increase production and deliveries.

At 24,500 units, Tesla's third-quarter deliveries were about 40% higher than any other quarter, up 70% sequentially, and up a whopping 111% year over year. But what's more notable than Tesla's growth in Q3 is the trajectory of the company's growth rates. As it turns out, the bigger Tesla gets, the faster it grows.

With a big third quarter behind it, Tesla isn't just growing rapidly, but it's growing at an accelerating rate. Consider Tesla's trailing-12-month year-over-year growth rates, which arguably make up the best method for assessing the automaker's growth trajectory. 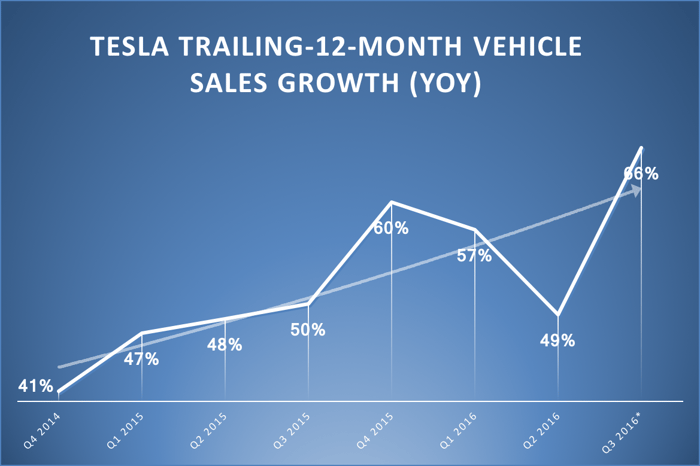 Data source: Company SEC filings and press releases. Asterisk indicates deliveries for the most recent quarter are approximate and "slightly conservative," according to Tesla management. Chart by author.

Tesla's vehicle deliveries in the trailing 12 months are up 66% from the year-ago period -- a faster rate than any trailing-12-month period in the last eight quarters. Even more, growth rates during this period are, in general, rising.

This accelerating growth goes against the type of growth you would expect to see from a company in an industry known for its high capital-expenditure requirements and manufacturing complexity. It would be rational to assume Tesla's growth rates would decelerate as its vehicle deliveries grow. But this chart shows that Tesla is doubling down on growth as it acquires manufacturing experience.

Even faster growth will be required

Though Tesla's accelerating growth in vehicle deliveries might seem impressive, this is the sort of growth trajectory the company will need to pull off to achieve its target of producing 500,000 vehicles annually by 2018. In other words, Tesla's year-over-year growth rates in both deliveries and production will need to continue to accelerate -- eventually even reaching triple digits -- for the company to grow as fast as it plans to.

Tesla's rapidly accelerating growth recently may help mitigate investor concerns about the company's ability to boost production fast enough to hit its targets over the next couple of years. However, production will need to soar for a build rate of 500,000 by 2018 to look like a probable outcome.

As Tesla's late 2017 timeframe for its Model 3 launch draws closer, investors should keep a close eye on the company's plans to lay the groundwork for higher-volume production for the lower-cost vehicle. After all, it will be the key to getting Tesla from the 100,000-unit annual production run rate it achieved in Q3 to its 2018 target for 500,000 vehicles. Meanwhile, investors should look for Tesla to continue to deliver significant growth in the near term.