Cameco Corporation (NYSE:CCJ) mines for uranium, which counts nuclear power plants as its prime customers. Ever since the Fukushima meltdown in Japan, though, that end market has been in something of a state of flux, exacerbating the oversupply of the nuclear fuel -- and the downward pressure on the miner's shares. But the past isn't the future -- here are three reasons Cameco Corporation's stock could rise from here.

Right now, China is the 800-pound gorilla in the nuclear power industry. According to the U.S. Energy Information Administration (EIA), the country will account for around half of the world's growth in nuclear power through 2040. It makes some sense, too, since the nation is huge and moving up the socioeconomic ladder. Reliable electricity is a big part of that process.

India is working hard to get a reliable grid up, too, and has strong potential as a catalyst for growth in nuclear. China and India, population-wise, are pretty close in size. Along with China, it will be a core force behind the expected growth in nuclear power globally. At this point, though, India's plans are nowhere near as aggressive as China's. A lot could change between now and 2040.

If India decides to step up its nuclear ambitions in line with those of China, then demand for uranium would turn out to be even greater than now anticipated. Investors would likely react favorably to such news.

There's no question that renewable power is an increasingly important force in the power market, taking share from dirtier fuel sources, like coal. The fact that technologies like solar and wind are getting better and cheaper clearly helps that. Still, renewable power is often subsidized by government largess. If for some reason -- perhaps another global recession -- that should stop, renewable power's march toward dominance might slow, which would be good for nuclear power.

But that's only half the picture. Part of nuclear's problem is that it is costly to build and run when looked at on a levelized cost basis, a metric that takes all costs (for example, construction, fuel, and operating expenses) into account. However, General Electric (NYSE:GE), among others, is working on next generation of nuclear power plants that could help change the math. The company's PRISM technology is expected to support smaller, safer, and more efficient nuclear reactors. To give you an idea of the advances GE is working on, the tech can actually use nuclear waste as fuel.

These advances are still a long way off at this point, with GE expecting its first PRISM units to be up and running in the mid-2020s. However, if GE can deliver on the technology, nuclear would suddenly become a much more competitive power option. And that would make a uranium supplier like Cameco a much more desirable investment.

Those are big-picture issues, to be sure. But there's a more fundamental one that could help boost Cameco's shares, too. And that would be the company simply running its business well, even in a difficult environment. So far, it's been doing that. 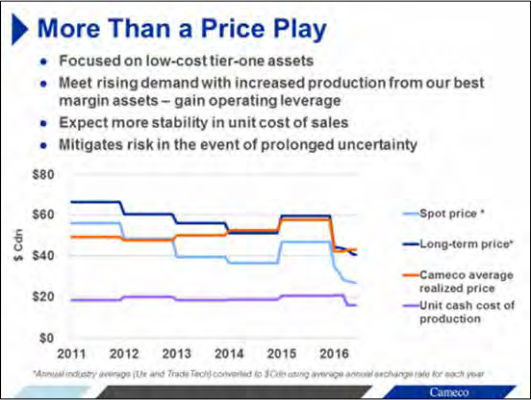 Notice the dip at the far right of the cost line. Image source: Cameco.

For example, the company has been able to push its costs notably lower (look at the right side of the graph above), and that comes after years of roughly stable costs. Clearly, Cameco is working hard to ensure it can compete in today's market. It's also kept its leverage to a reasonable level despite the downturn, with debt as a percentage of the capital structure at roughly 20% or so. That's completely reasonable for a capital-intensive business like mining.

Moreover, the company has remained profitable through the uranium price downturn -- at least until this year. Through the first half of 2016, the company has lost $0.15 a share, compared to earnings of $0.20 a share last year. Investors haven't taken kindly to that, with the shares off some 30% so far in 2016. But, if Cameco can find a way to turn a profit with today's prices (cost-cutting is a key piece of that, even though it may require the near-term pain of asset writedowns), investors will likely start to view the shares in a better light.

The truth is that there's no easy fix for Cameco. From a big-picture perspective, demand for nuclear power will be a key factor in how investors view the uranium miner. If there's more demand than expected, perhaps from India, that would likely be good for Cameco's stock price. Similarly, if up-and-coming clean power sources like solar and wind hit a speed bump, uranium might find itself back in the limelight. That, too, could benefit Cameco's shares.

Looking closer to the core, though, Cameco's biggest challenge today is working itself into fitter fighting shape, which it's trying hard to do. If it can keep the progress going, and claw its way back from the losses it's posted in the first half of 2016, investors would see the shares in a much more positive light.