A look at the roots

Thermal coal, which is used in power plants, is all Alliance Resource Partners does. It's basically all the miner has ever done. The company has a heavy focus on the Illinois Basin, a coal region that has been able to take market share from other domestic coal regions. For a long time that allowed Alliance to grow its business while others were struggling with weak demand. Although Alliance has finally had to rein in its horns a little, trimming production, it is easily one of the best-positioned coal miners in the country -- despite a distribution cut earlier this year.

CONSOL Energy was, at one point, a coal miner with some nice natural gas assets. Today, that's reversed and it's really a natural gas driller with some nice coal assets. A number of years ago, the miner saw the writing on the wall and started to adjust to a future in which natural gas would take the energy lead over coal -- something that appears to be happening today.

That said, after selling a large portion of its coal business to raise cash for its natural gas business, CONSOL still had some pretty good coal assets. It spun those off into a limited partnership called CNX Coal Resources LP (NYSE:CCR). This allows CONSOL, which is the partnership's general partner, to retain control of its coal assets, earn money from operating them, receive distributions from owning units (it owns around 53% of the LP's units), and take advantage of incentives for increasing the distribution over time. CNX Coal owns a mix of thermal coal and metallurgical coal (used in steelmaking), as well as processing and transportation facilities.

To the future, if you can get there

On the surface, CONSOL would seem like it has positioned itself really well for the future. After all, thermal coal is facing serious environmental headwinds and a material competitive threat from historically low natural gas prices. But in that lies the problem.

CONSOL lost money in 2015 because of asset writedowns in its gas business and bled red ink in the first and second quarters this year, too. A key problem is that natural gas prices have been weak, putting pressure on the top line at the same time that CONSOL has been making major changes to its business (like spinning off CNX Coal). In fact, CONSOL just sold another coal mine and announced that it would eliminate its dividend to focus on "growth." 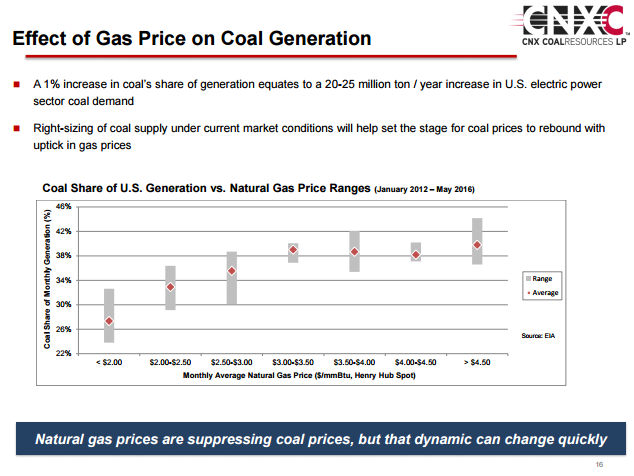 Alliance, on the other hand, has remained profitable throughout the thermal coal industry's downturn. And, at this point, it expects to cover its reduced distribution by two times this year, an almost unheard of level of coverage in the limited partnership space. Alliance is on pretty solid ground financially when you compare it with CONSOL.

So, at this point, CONSOL is really a changed company, while Alliance Resource Partners is still what it's always been -- a well-positioned thermal coal miner. Which one is the better investment? It depends on how you view the world.

If you are an income investor, Alliance's roughly 8% distribution yield easily wins the day. CONSOL, which no longer offers a dividend, shouldn't even be an option for an income investor. Moreover, if you prefer to stick with a company that's making money, well, Alliance wins again.

However, if you take a long-term view of things, CONSOL could have the edge. Coal is clearly being challenged today by alternative fuels, including natural gas. CONSOL is probably going to see increasing demand for the fuel it's decided to back over the long haul. However, oversupply is keeping gas prices low and it's hard to call a turn in that dynamic. Which means CONSOL could continue to lose money even as it uses its coal LP to keep building out its gas business for the future.

So, from a big-picture perspective, CONSOL's plan sounds pretty good, but right now the results don't look all that great. If you buy into the long-term story that natural gas is a growing business and coal a dying one, then CONSOL should probably be your choice -- but only if you are willing to suffer through the business transition and uncertain natural gas price environment of today.

Note, too, that if gas prices improve, coal prices are likely to follow along for the ride. So the story behind CONSOL is really about gas displacing coal more than it is about gas and coal prices. In fact, rising gas prices could help improve the fortunes of both Alliance and CONSOL at the same time in the near term.