Well-established technology company Garmin (NASDAQ:GRMN) and newer upstart Fitbit (NYSE:FIT) are betting that the Internet of Things, specifically wearable devices, can propel their businesses higher. With the two companies in very different financial situations, though, one is a better bet than the other for investors.

Leveraging GPS as the IoT takes over

Garmin got its start in the 1980's helping various businesses and later individuals put the new Global Positioning System to use in their lives. While this is still the company's bread-and-butter with tech designed for transportation, the automotive industry has increasingly accounted for less of overall revenue.

Automotive is slowly being replaced by the fitness and outdoor division, wearable devices for active consumers that still feature the legacy GPS that has become Garmin's hallmark. The unit designs and sells everything from fitness trackers to action cameras.

That trend is reversing so far in 2016. Through the first six months of the year, sales are up 6%, led by double-digit advances from the fitness and outdoor wearable technology division. Automotive continues to drag and is down 16% year-to-date, but as an older and better-established segment, it carries a higher profit margin than the newer wearables units.

Garmin continues to invest into the wearable market and sees that as the main driver in the foreseeable future. That didn't pay off in 2015, but the company expects it will start to this year. The updated outlook through the end of 2016 is for revenue to be up 3% from last year. While earnings per share is now expected to come in flat from last year, the previous guidance from management was for an 11% year over year decrease.

Connected fitness is all the rage

Fitbit is also using the popularity of wearable devices among the active consumer demographic. The company designs and sells connected activity trackers and smart watches, but lacks the diversified business that Garmin has. 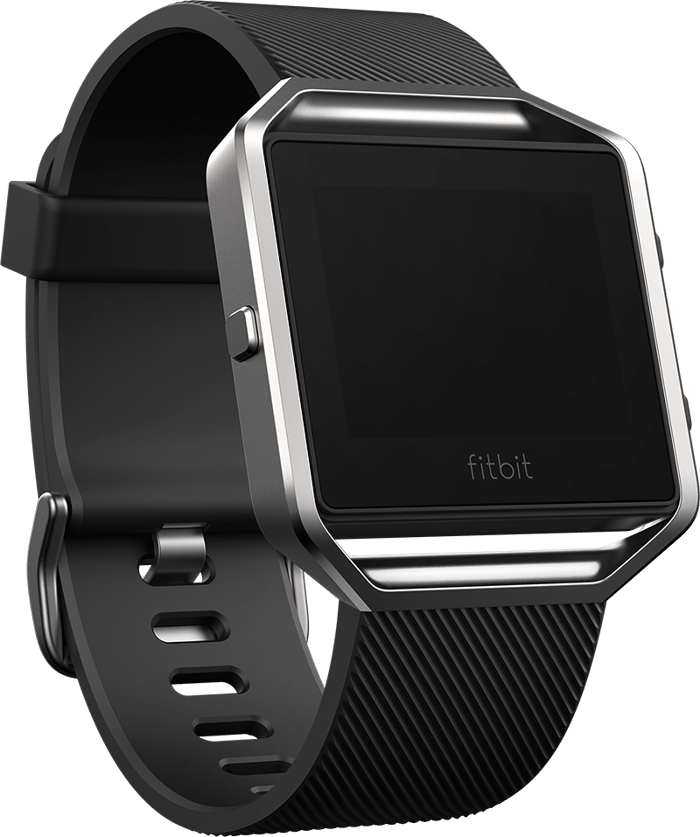 This explosive growth has eaten into profitability, however. Last year's profit of $0.29 has been trimmed to a meager $0.07 through the end of June. The reason is the increasing cost of research and development, topping $152 million this year versus the $53 million last year; and a doubling of sales and marketing expenses to $225 million so far this year.

The good news is that this increased spending is equating to continued growth. The most recent outlook issued by management is that revenue will come in between $2.5 and $2.6 billion, a 35% increase over 2015. The profit picture is also expected to improve from the big drop seen so far this year. Fitbit sees profits ending up roughly flat from last year, implying strong business performance to finish out 2016.

Both companies are growing wearable connected device sales, but I think only one is positioned to see business, profitability, and share price growth: Fitbit.

After losing more than half of its lofty IPO debut price, Fitbit trades at a more reasonable but still steep 28 price-to-earnings ratio based. This compares with Garmin's near 40% rise in the last year, giving it a steep P/E ratio of nearly 18 -- high for a company that sees no profitability growth in the near-term. 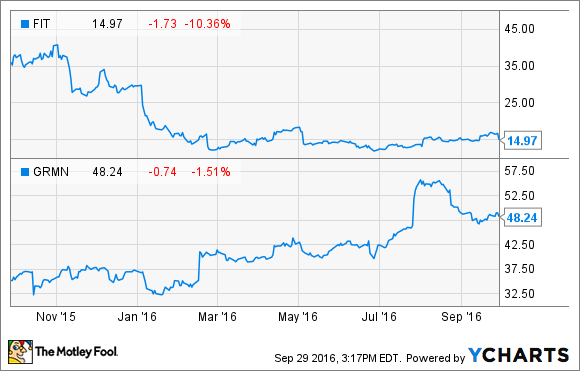 However, when considering expected profits in the next year, Garmin's P/E ratio doesn't change much. Fitbit, on the other hand, drops to 14, implying expectations for profitability to more than double as the company continues to grow.

Free cash flow, or money left over after normal operations and expansion efforts are paid for, is also increasing for both companies in the last year. However, Fitbit has been able to accomplish this while still expanding. Garmin, which saw long-term stable cash flow dip as it has ramped up wearable efforts, is spending extra cash to only put out an expected low single-digit growth rate this year. 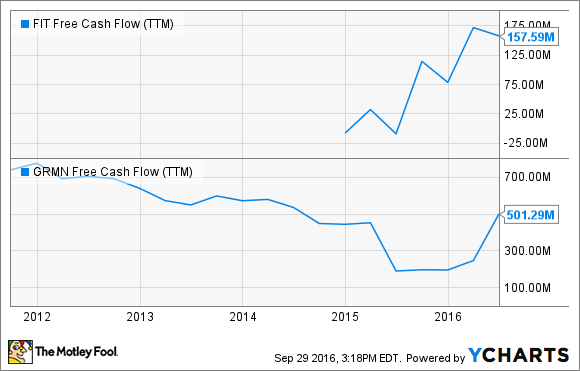 Considering these things, I like Fitbit's chances at growing its business using the wearable technology revolution. Garmin is a stable business, but the IoT and wearables division so far is just helping offset lost sales from its older business.