Vanguard Natural Resources (NASDAQ: VNR) is running out of time to address its precarious financial situation. In fact, after electing not to make a semiannual interest payment on its debt this week, the company has just 30 days left to pull off a miracle. That said, given what has happened to peers that attempted this same tactic earlier this year, it does not seem like things will turn out any better this time.

On Oct. 1 Vanguard Natural Resources was due to make a $15 million semiannual interest payment on its 7.785% senior notes due in 2020. However, the company decided to take advantage of a 30-day grace period "to preserve liquidity and flexibility pending the outcome of the fall borrowing base redetermination" on its credit facility. As a result, the company has a month to make the interest payment, or it will be in default, which would entitle its creditors to declare all of its obligations to be immediately due and payable. That would then likely plunge the company into bankruptcy.

The fact that Vanguard Natural Resources needed to use its grace period does not bode well for the company's future, especially given what happened to other oil and gas producers that employed a similar tactic. This spring upstream MLPs Breitburn Energy Partners and LINN Energy, as well as several traditional exploration and production companies, elected to use their 30-day grace periods to try and negotiate debt-restructuring deals with creditors. Unfortunately, none was able to work out a solution, resulting in each filing for bankruptcy.

Bankruptcy is a fate that Vanguard Natural Resources is desperately trying to avoid, which is why it hired investment bank Evercore in early August to assist it in identifying and negotiating new potential capital sources. That is noteworthy because Evercore is the same bank that has helped Chesapeake Energy (OTC:CHKA.Q) successfully navigate a mountain of debt and near-term liabilities. In fact, through a combination of asset sales and debt exchanges, Chesapeake Energy cut more than $1 billion in debt since hiring Evercore, while its 2017 debt maturity liabilities are down 37%.

That said, Vanguard's biggest problem is not so much its overall debt but the fact that it borrowed $1.424 billion under its reserve-based credit facility. That facility became a grave issue when its banks cut the borrowing base by 26% this May, down to $1.325 billion. As a result, Vanguard had a $103.5 million deficiency that it needed to repay in six equal monthly installments. Contrast this with Chesapeake Energy, which hasn't borrowed anything on its $4 billion facility, leaving it with ample liquidity after its borrowing base was reaffirmed earlier this year; the base will not be redetermined again until next June.

Needless to say, Evercore faces an uphill battle because Vanguard's credit facility is up for redetermination this fall. If its banks cut the borrowing base again, it is likely "game over" for the company, unless it receives a significant cash infusion from outside investors or asset sales.

That said, it is possible that Vanguard's banks could decide to reaffirm its borrowing base at the current level, which would provide it with enough breathing room to possibly buy Evercore time to find a long-term solution. A reaffirmation is not out of the question, given that natural gas prices are up substantially since banks last redetermined the company's credit facility: 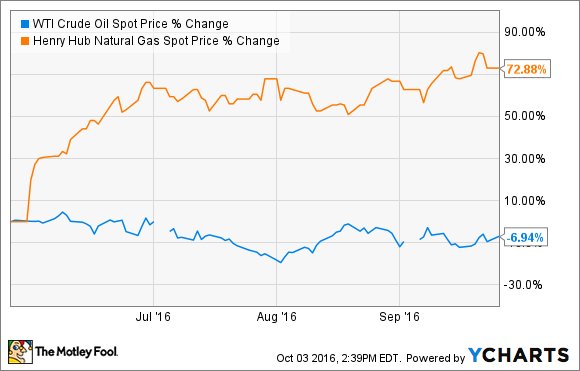 That is worth noting because 69% of the company's reserves are natural gas. Still, a reaffirmation would be just a short-term solution, with the company needing to follow in Chesapeake Energy's footsteps and meaningfully reduce debt to put its financials back on solid ground.

Vanguard Natural Resources' decision to defer an interest payment on its debt is not a good sign, especially considering the outcome for other producers that used that tactic earlier this year. There's a very real risk that the company could follow them into bankruptcy before the month is over. While there is some hope that its banks will not cut its credit facility, the company still needs a meaningful reduction in its bank debt to ensure its long-term viability.