With crude oil steadying at around $50 a barrel in recent weeks, many oil companies are gaining confidence to invest in their futures. Leading shale driller EOG Resources (NYSE:EOG), for example, is now planning to boost oil production by 10% annually through 2020 at flat $50 oil.

That said, some rival companies are nowhere near the point of projecting robust future growth, and instead are still trying to survive. Three such oil stocks that I am watching closely are Vanguard Natural Resources (NASDAQ: VNR), Baytex Energy (OTC:BTEG.F), and Denbury Resources (NYSE:DNR), each of which has more than one major impediment holding it down.

Upstream MLP Vanguard Natural Resources is on the precipice of going under. At the start of October, the company elected not to make the $15 million semiannual interest payment on its senior notes. Instead, it took advantage of the 30-day grace period to "to preserve liquidity and flexibility pending the outcome of the fall borrowing base redetermination." With the month now drawing to a close, the company faces the haunting reality that it needs to make that payment or else it will be in default, which entitles its creditors to declare all of their obligations to be immediately due. Such an event would likely plunge the company into bankruptcy.

The real issue, however, is not Vanguard's ability to make that interest payment, but the fact that it overstretched its credit limit. That is after its banks cut the company's borrowing capacity by 26% in May to $1.325 billion, which was below the $1.424 billion it borrowed. Those same lenders are meeting again this fall to redetermine the borrowing base, and could cut it again. If they do, it is likely "game over" for Vanguard Natural Resources.

That said, Vanguard scheduled its third-quarter earnings call on Nov. 9, which suggests that there is a light at the end of the tunnel and there are no immediate plans to file for bankruptcy. Still, even if it makes it through this rough patch, the company has a huge mountain to climb before it will be back on solid ground.

Canadian heavy-oil producer Baytex Energy's credit situation is nowhere near as dire as Vanguard's. In fact, back in March, it announced amendments to its credit facility whereby it agreed to a reduction in its borrowing base to $575 million, in exchange for more flexibility. Further, this is not a borrowing base facility, so it is not subject to regular redetermination periods, which gives Baytex clear visibility on its liquidity.

Instead, the company has two main issues. First, it has $1.9 billion of debt outstanding, which is just too much for the current market. As a result, the company has had to slowly chip away at its debt via small noncore asset sales and by generating excess cash flow.

That said, the only reason it is generating excess cash flow is by not investing enough to sustain its asset base. That led to its second major issue: a decline in its production. Worse yet, the company will not generate adequate cash flow to maintain production until oil is sustainably over $55 per barrel: 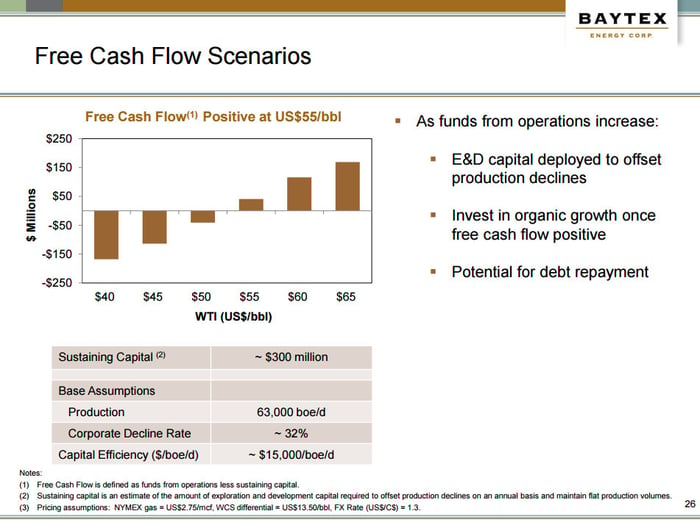 We can also infer from the chart that the company will not be in the position to grow its output until crude reaches $60 or more. Contrast this with EOG Resources, which would be able to ramp up its growth rate to 20% compounded annually at $60 oil. Needless to say, Baytex Energy still has some work to do so that it can thrive at lower prices like EOG.

Not enough of an improvement

Like both Baytex and Vanguard, Denbury Resources has spent lots of time and effort on improving its balance sheet. It too had its borrowing base reduced, with its banks slashing it 30% in April to $1.05 billion. However, it is worth noting that they did reaffirm it at that level this fall, which bodes well for Vanguard's looming redetermination. Furthermore, through the first half of this year, the company has reduced its net debt by 14% via debt exchanges and open-market purchases. That said, the company still has too much debt, with analysts saying that its balance sheet is still "stretched."

Denbury's other issue is the fact that as an enhanced oil recovery (EOR) company, its projects take more capital and time to deliver oil than shale wells. For example, a new EOR flood can take years to develop due to the need to construct carbon-dioxide pipelines to bring gas to the field, while expanding existing fields requires drilling both injection and production wells. Contrast this with shale, where EOG Resources, for example, can drill wells in under a week due to remarkable gains in efficiency over the past few years. Because of that speed, EOG is guiding to deliver double-digit growth next year. Meanwhile, it could be quite some time before Denbury would even be in the position to ramp up its production, after two years of underinvestment.

There is a dichotomy developing in the oil market. Well-capitalized shale drillers like EOG Resources are in a position to thrive now that oil is hovering around $50 a barrel. On the other hand, overleveraged conventional producers are still struggling, because they have higher costs and their growth opportunities often take longer to develop; they will likely trail the oil market as the recovery takes hold.