Apple Watch Series 2 may not be a hit. Image source: Apple.

This doesn't look good for Apple's (NASDAQ:AAPL) wearable. KGI Securities analyst Ming-Chi Kuo put out a research note to investors earlier this week (via AppleInsider) detailing the possibility that Apple Watch unit sales could actually decline this year. That's even despite the fact that Apple Watch was only available for about eight months last year, compared to full-year availability in 2016.

The analyst has reduced his unit estimates for Apple Watch by 15% to 25%, and now expects the company to only sell between 8.5 million to 9 million total units in 2016. That's down from Kuo's prior estimated range of 10 million to 10.5 million units. Either way, it's bad news compared to the 10.4 million Apple Watches that Kuo believes Apple sold in 2015. We do know that Apple sold somewhere between $2.5 billion and $4.5 billion worth of Apple Watches in 2015. The high end of that revenue estimate combined with Kuo's unit estimate would translate into an ASP of around $432, which passes the sniff test.

Apple has taken steps this year to broaden the appeal of Apple Watch. It started off In March by reducing the price of Series 1 by $50, bringing the starting price down to $299. When it introduced Series 2 last month, Apple kept Series 1 around and knocked the price down even further to $269, while ditching the prohibitively expensive gold Apple Watch Edition. Those are clear indications that Apple is trying its best to appeal to mainstream consumers, while demand thus far is likely concentrated in Apple's loyal base of early adopters.

With a quarter left in the year, it would seem that Apple's efforts are unsuccessful if Kuo's estimates turn out being remotely accurate. Kuo doesn't believe there is a must-have feature that can drive mainstream adoption. Battery life still leaves a lot to be desired, and Apple Watch still can't operate as an independent device without an iPhone, limiting its appeal.

Seeing a 2016 decline would be disheartening for Apple's first new product category since the iPad, and would really underscore how important it is to appeal to the mainstream consumer. Fitbit (NYSE:FIT) still leads the market in terms of basic fitness tracking at affordable price points. Fitbit's unit sales are definitely heading the right direction. 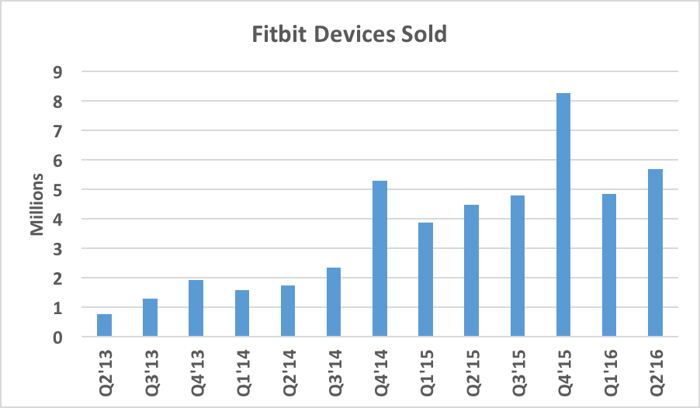 While I think the odds are still stacked against Fitbit in the long term, since it won't be able to create a full-fledged platform with third-party developers, Fitbit is decidedly not sitting still here. The company has released a handful of new products over the past year and continues to move upmarket in terms of pricing (average selling prices are near record highs at around $103), all while remaining committed to its popular Flex line that starts at $100.

Since Apple is unlikely to come downmarket much more than it already has, the trick for Apple is going to be adding enough features and functionality over time to convince mainstream consumers to pay the premium over what a basic Fitbit costs. That doesn't appear to be happening this year.