After a second consecutive month of higher gaming revenues, it's beginning to look like Macau is back on track. A better than two-year slide in monthly revenues took its toll on the gambling enclave, the only place in China where it's legal to gamble, but with Wynn Resorts (NASDAQ:WYNN) and Las Vegas Sands (NYSE:LVS) opening new venues that appear to be reeling in the high rollers again, maybe Macau's woes are behind it.

Or not. It's generally agreed the new Wynn Palace that opened on August 22 was responsible for the turnaround reported that month, as analysts said gaming revenues that had been trending down all month suddenly reversed and shot higher, ending the month up 1.1%. 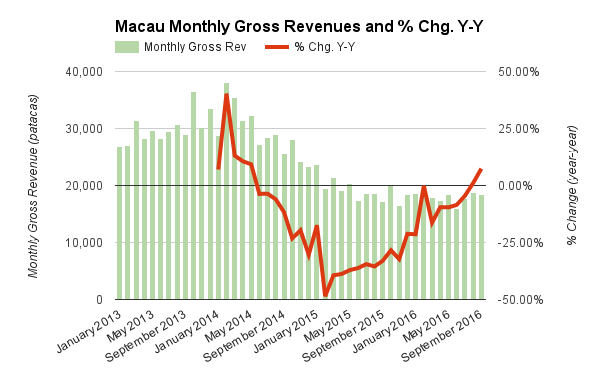 That was followed in September by the opening of the Sands Parisian, and gaming revenue surged 7.4%, the biggest monthly gain since May 2014. Of course, today's revenues are still some 43% below that period two and a half years ago, but it's a welcome respite from the constant drumbeat of bad news Macau has endured.

Still, questions remain about whether the gambling oasis can maintain the momentum. Here are five good reasons growth might stall again.

The dramatic decline in the enclave's fortunes was largely caused by Beijing seeking to control the flow of money into Macau from China's uber rich, in conjunction with a crackdown on corruption that snared several high-profile junket operators.

Junket operators typically fly in wealthy gamblers, putting them up at the different resorts and providing the VIPs with gifts and benefits. In return, the junket operators earn a percentage of the money the high-rollers drop at the gaming tables, mostly at high-stakes baccarat tables, the so-called game of kings that is popular among the VIPs.

The crackdown, though, caused a flight of money. Where Macau had been generating monthly revenues north of 30 billion patacas, the local currency, it now routinely only sees revenues in the high teens.

Instead of facing the scrutiny Beijing was imposing, the high rollers began looking elsewhere for places to gamble. Resorts in Australia, Malaysia, the Philippines, and Singapore have all benefited from the tougher rules as the VIPs flocked to their locales.

In Australia alone, there are billions of dollars worth of projects in the pipeline to build or expand some 12 casinos in an effort to woo Chinese gamblers, and billionaire James Packer greatly reduced his stake in Macau's Melco Crown Entertainment (NASDAQ:MLCO) to focus on Crown Resort's gambling opportunities down under.

A pause in construction

Although it's believed that interest in the world-class casinos and resorts that both Wynn and Sands are famous for was enough to draw in VIPs to check out the venues, there are no more new casino openings scheduled until MGM Resorts (NYSE:MGM) opens its new MGM Cotai sometime in the second quarter of 2017. The new casinos might not be able to maintain their hold on the high rollers till then.

It was reported soon after the Parisian opened that revenues at the Palace had already turned soft. While Wynn says its existing Wynn Macau resort had not been hurt by the Palace's opening, analysts said there were indications the new venue's revenue was coming in "lighter than expected." It may be that people went on to the new new thing at the Parisian, and with nothing to hold their attention for quite a few months, revenues may slump once more.

Of course, the casino operators are under a mandate to open more resorts that have greater appeal to mass-market audiences. All the new venues that have opened over the past year or so have downplayed the VIP market and highlighted more family-friendly fare such as theme park rides, retail shopping opportunities, and table games everyone can play.

With the district under orders to increase the amount of revenues realized from these alternative forms of entertainment, gaming revenue is likely to suffer. The casinos may make up for some of the lost revenue with these sideline attractions, and they're more profitable, but only if the the tourists come.

A test of that will be this first week of October, which is a major holiday in China: the National Day Golden Week. While more tourists do usually visit Macau during this time, the holiday also coincides with a visit by Chinese Premier Li Keqiang. A high level government official hasn't visited the gambling oasis since 2014, and that meetup was marked by official denigration of the excess of luxury and gambling, which preceded the decline in revenues. Since official Chinese policy hasn't changed since then, the premier's presence could serve as a deterrent for VIP gamblers.

A risky bet on recovery

Macau has certainly bounced off of the lows it hit last year when revenues were falling by 50%, but that doesn't mean investors should expect casinos will be hitting the jackpot again anytime soon. Current lower levels of casino gaming wins, although off the absolute bottom, should probably be seen as the new normal for some time to come. Until casinos are able to demonstrate they can reliably grow without depending upon new venues to give revenues a boost, a bet at this point may be too risky.