If you're following Facebook, Inc. (NASDAQ:FB) stock, you might want to mark your calendar. The company has just scheduled its third-quarter earnings release. Set for Nov. 2, Facebook's Q3 release is particularly important as it follows a long stretch of incredible, expectation-crushing growth. Can the company keep it up?

Here's an early preview of the quarter ahead of the release.

Look for more rapid growth -- but not as rapid

One of the most important areas to watch when Facebook reports third-quarter results will be the company's revenue growth. After all, with the stock up 12% in the last three months and about 39% during the trailing 12 months, investors are clearly expecting Facebook to continue growing its business.

Recently, Facebook's quarterly revenue has not only been growing at rapid rates, but also at accelerating rates. 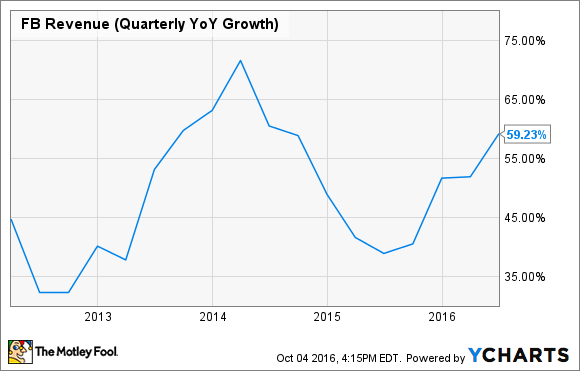 After Facebook's revenue growth began decelerating in 2014, growth rates surprisingly started to pick back up again in 2015. And now the social network's year-over-year revenue growth reached a staggering rate of 59% in the company's most recent quarter.

Can Facebook's revenue grow by a similarly wild rate in Q3? It's possible. But investors shouldn't count on it -- at least not according to Facebook management.

Wehner further suggested growth will likely continue to decelerate in 2017 as well, since the company anticipates its growing ad load, which has been a key revenue driver, will grow "modestly" about halfway into 2017 but "will be a less significant factor driving revenue growth" after this period. "We expect our ability to grow revenue will be impacted accordingly," he said.

Of course, it was pretty obvious Facebook's recent monstrous revenue growth wouldn't be sustainable forever, so an expected deceleration in this key metric isn't any reason to get bearish on the stock.

So, what sort of revenue growth should investors expect from Facebook in Q3? In light of the company's tough year-ago comparison, when the social network increased revenue by 41%, I'm anticipating growth of about 48% (down from 59% year-over-year growth in Q2). Notably, this would put Facebook's third-quarter revenue at about $6.7 billion -- up from revenue of $6.4 billion in Q2. So, even with a sharp deceleration in year-over-year growth rates between Q2 and Q3, Facebook's revenue would still increase meaningfully between the two quarters.

Investors may also want to check on the growth of Facebook's different social platforms.

While Facebook management doesn't provide very specific data on WhatsApp, Messenger, and Instagram user growth, investors could at least look for some commentary on these platforms during the company's earnings call. For Facebook itself, investors should look for growth similar to the 15% and 17% respective year-over-year growth for its monthly and daily active user metrics it reported in Q2.

Facebook will report its third-quarter results after market close on Wednesday, Nov. 2. The earnings call, which investors can listen to live by accessing the call on the company's investor relations website, will begin at 2:00 p.m. PDT.