Please ensure Javascript is enabled for purposes of website accessibility
Log In Help Join The Motley Fool
Free Article Join Over 1 Million Premium Members And Get More In-Depth Stock Guidance and Research
By Tyler Crowe - Oct 5, 2016 at 9:47AM

Shares of CVR Refining (CVRR) climbed 27% in September thanks in large part to the announcement that it was building a crude pipeline that will directly source oil from a local shale formation. The initial reaction to the pipeline was extremely positive, bordering on overexuberant, but it was still enough to give the company a strong boost for the month. 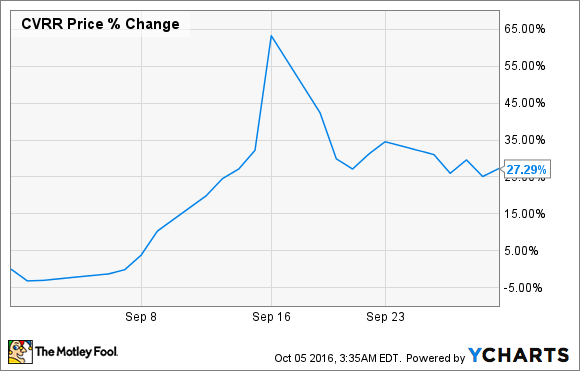 One of the things that CVR Refining has had going for it over the years is the ability to source crude relatively cheaply because of its close proximity to Cushing, Oklahoma -- one of America's crude oil hubs. As more and more oil is being produced from shale in this part of the country, that advantage is increasing. One major flaw in this strategy, though, is that most of the crude gathering from this part of the country is from a truck fleet, which is a much more expensive way to move oil.

The new joint venture pipeline with Velocity Midstream will source oil from the South Central Oklahoma Oil Province -- known more commonly as SCOOP in the oil industry -- shale reservoir. The new pipeline, in conjunction with Velocity's other pipelines in the region, will allow producers to separate the lighter and heavier crude oil types produced in the region and give CVR Refining cheaper access to these different crude types. The ability to choose different crude types is important because CVR's refineries are rated to handle heavier crude oil, which typically is less expensive than lighter barrels.

These past two months have been pretty good for CVR as rumors that its parent company, CVR Energy (CVI -0.03%), was interested in buying Delek US Holdings (DK 0.82%) last month and the Velocity announcement this month have pushed shares up close to 50% since Aug. 1. One thing to remember, however, is that shares of CVR Refining are trying to recover after a brutal first half of the year. 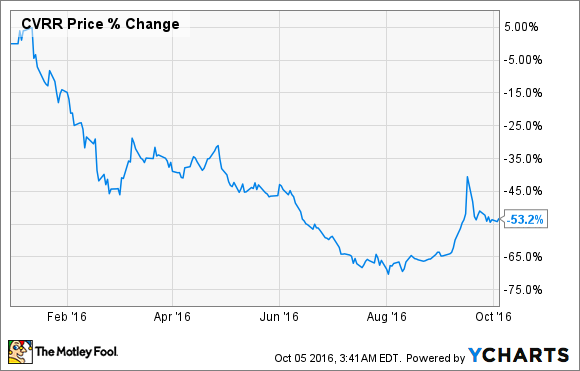 This pipeline deal will help the company lower its crude sourcing costs and increase refining margins for the company, something that all investors should be happy to see. That being said, the company is still working through a tough operating environment for refiners today, and it may take more than slightly lower crude costs before it gets back to paying a quarterly distribution.

Before making any moves with this stock, it's worth waiting to see a quarterly earnings report or two that show some improved financials.