Shares of U.S. land drillers Nabors Industries (NYSE:NBR), Patterson-UTI Energy (NASDAQ:PTEN), and Helmerich & Payne (NYSE:HP) saw shares climb 22%, 15%, and 11%, respectively, in September. The biggest spike was attributed to the news at the end of the month that OPEC had decided to cull production slightly, but it also helped that U.S. drilling activity continued to recover from all-time lows back in May. 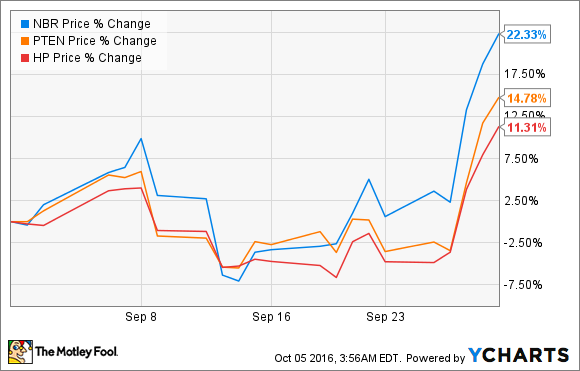 In the past few months, there has been an underlying trend that the U.S. oil and gas industry is getting back on track. Rig counts have been on the rise for more than four months now as oil prices have hovered in the range of $40-$50 a barrel and producers have continued to eke out every cost efficiency possible to lower their production costs and breakeven price. Today, total rig count has improved by a little over 100 rigs -- 25% -- since the low in May. 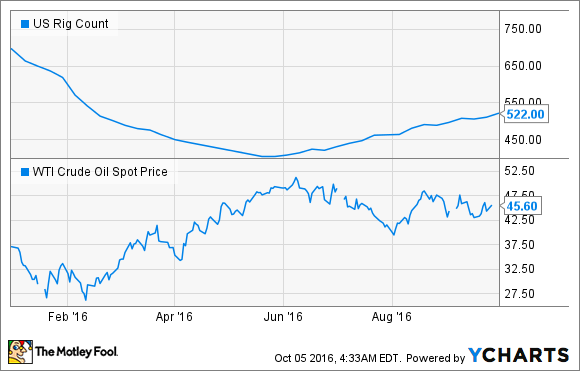 For drillers like Nabors, Patterson, and Helmerich, this means that more rigs are being put to work, and it couldn't come at a better time. All of these companies' fleet utilization rates were at dismal rates and every company in the industry reported losses in the second quarter of 2016.

On top of that underlying good news, the entire oil and gas industry got a decent overall boost when OPEC announced that it intends to cut back total production. While the details of the production cut won't be announced until the annual OPEC meeting in November, the general consensus from Wall Street is that this is finally signaling the oil and gas market is on track for the longer-term recovery that we have been expecting for a couple of years. It's pretty easy to see on the chart above when that announcement came.

Before you go and run into any of these stocks, there is one small component you need to keep in mind. Helmerich & Payne has noted in some of its recent investor presentations that many of the new rigs being taken up are for private equity companies that have bought some assets on the cheap and are using some pretty low-spec rigs to try to squeeze a small profit by going cheap rather than focusing on the best well economics possible. This means that the high-end rigs for Nabors, Patterson, and Helmerich & Payne -- the real moneymakers for these companies -- are still idle.

As the larger exploration and production companies and the integrated oil and gas majors jump back into the drilling game, they will much more likely use the high-end rigs that they keep in their fleet. This equipment is better designed for the complex jobs of horizontal drilling and working on multiple wells from a single pad. So some of the initial gains in the rig market won't be felt by these players for a little while longer.

Ultimately, things are headed in the right direction for Nabors, Patterson, and Helmerich & Payne. If OPEC stays true to its word and does lower production, we should hopefully see a strong enough price reaction to get U.S.-based shale drillers excited to put rigs back in the field. It will likely take a few more quarters before this happens, and this recent price surge could fade into obscurity before then. The big thing to look for is improving rig utilization rates in the upcoming financial reports from these companies.