Before electric-car maker Tesla Motors (NASDAQ:TSLA) reported its third-quarter vehicle deliveries, there was good reason to be concerned about demand for the company's Model S sedan. With declining deliveries for two quarters in a row, some investors may have been questioning whether or not high levels of demand for the 2012-launched model were sustainable. But a significant resurgence in Model S deliveries in Q3 suggests demand for the vehicle is healthy.

Earlier this month, Tesla announced a record 24,500 deliveries in Q3. While the figure was higher than expected, the mix of these deliveries was arguably even more surprising.

Of the 24,500 deliveries, 15,800 were Model S and 8,700 were Model X. While the 8,700 Model X units delivered marked a huge jump from the approximately 4,600 units delivered in Q2, this sharp increase reflected the continued production ramp of the 2015-launched vehicle and was expected. A meaningful rebound in Model S deliveries, however, was somewhat surprising. 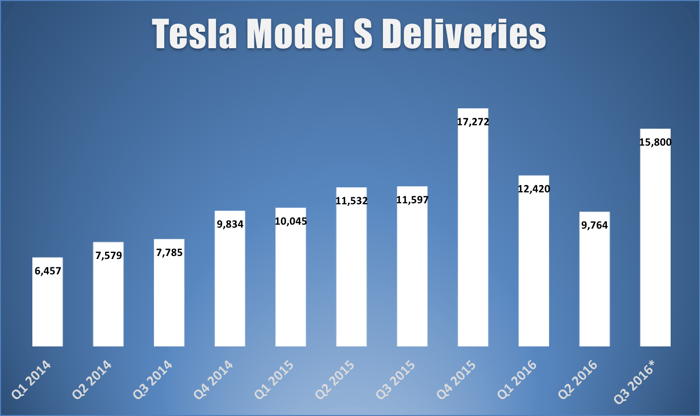 Before Q3, Tesla's Model S deliveries had declined from about 17,300 units in the fourth quarter of 2015 to under 9,800 units in the second quarter of 2016, their lowest point since the third quarter of 2013. That decline was particularly concerning because the simultaneous sharp rise in Model X sales during the period suggested the new model was cannibalizing a substantial portion of Model S sales.

But Tesla's 15,800 Model S deliveries in Q3, which were up 62% sequentially, were enough to ease concerns about the Model S falling out of popularity with consumers.

A rebound in Model S sales didn't occur naturally, though. The significant rebound in Model S sales notably follows the company's move in June to introduce a less costly version of the sedan, with a starting price of $66,000, or about $5,000 less than the company's previous entry-level Model S. Further, the automaker was gunning for a quarter-end sales push and even engaging in some aggressive discounting.

With a lowered price and aggressive sales tactics needed to achieve this Q3 number, investors should take it with a grain of salt. However, the quarter-to-quarter increase was sharp enough for it to demonstrate that Model S still can drive meaningful sales for the company.

Why Model S demand is important

High levels of Model S sales are key for Tesla for several reasons.

First, Model S still represents more than half of Tesla's vehicle sales. And while this could change in the fourth quarter and into 2017, it's clear sales from the vehicle will represent a significant portion of revenue for the company up until it launches its lower-cost Model 3 late next year.

Finally, the Model S offers investors a preview of the sort of demand Tesla might see with its future vehicles. If demand for Model S fades, this could suggest the market interested in long-range EVs is more limited than sales during a model's first four to five years suggest. So, continued strong demand for the Model S bodes well for the longevity of long-range electric vehicle models in general, making a better case for the market Tesla is after.

Of course, this is just one quarter of rebounding Model S sales, investors should keep an eye on deliveries of the vehicle in the coming quarters to get a better idea of how the vehicle is faring in the marketplace.