Why it's no fluke that the retailer has been soaking up market share for years.

A rising home improvement market has made winners out of both Home Depot (HD 1.68%) and its smaller rival Lowe's (LOW -0.36%). Both the retailers' sales and profits are at record highs, and they have each enjoyed years of improving customer traffic trends.

Yet Home Depot is accumulating a bigger share of this expanding market. Its net income has doubled in the last decade, compared to a 55% boost for Lowe's. Return on invested capital has surged to twice Lowe's figure, and its revenue growth has beat Lowe's since 2011 -- despite the fact that it isn't opening new stores.

That all adds up to evidence of a significant competitive advantage for the leading retailer in the home improvement industry. Below, I'll highlight two of the biggest contributors to that wide business moat.

Warehouse retailer Costco counts low prices as its key competitive advantage. "We do not focus in the short term on maximizing prices charged," executives explain in the 10-K, but instead "seek to maintain...'pricing authority' -- consistently providing the most competitive values."

The term "authority" figures high in Home Depot's list of competitive advantages, too, but not with respect to pricing. Yes, it aims to provide the lowest possible prices. But Home Depot is more concerned with what it calls "product authority," or sourcing the best mix of exclusive brands and innovative products for its customers.

As examples the company listed things like cordless outdoor power tools and SMART LED light bulbs that were popular in fiscal 2015. More recently, this strategy includes an animated display kit that projects images on screens and windows, just in time for Halloween. The digital projector is the first product of its kind on the marketplace and is exclusive to Home Depot.

Hundreds of annual sourcing decisions like these allow the company to claim the best mix of offerings, whether it's catering to do-it-yourself shoppers or to professional customers. The results shine through in the sales growth metrics: Home Depot's comps rose 7% last year compared to 5% for Lowe's.

As e-commerce soaks up a growing percentage of the retailing industry, it's not enough to just win business at your bricks and mortar stores. That's why Home Depot says its digital strategy is critical to its survival and helps separate it from the competition.

In fact, the company is taking a different tack than many rival national retailers. Rather than building up a stand-alone web presence and shopping app to complement its stores, Home Depot is actively driving traffic from its physical locations to its online options.

Employees are equipped with handheld devices that can order products for customers while they're shopping in the store, for example. The company also offers -- in addition to traditional delivery options from fulfillment centers -- conveniences like buy-online, pick-up-at-store. It is currently rolling out a national option for shoppers to order online and take delivery from their local store. For customers who are also trade professionals, they're seeing expanded next-day delivery, even of bulk items like concrete. 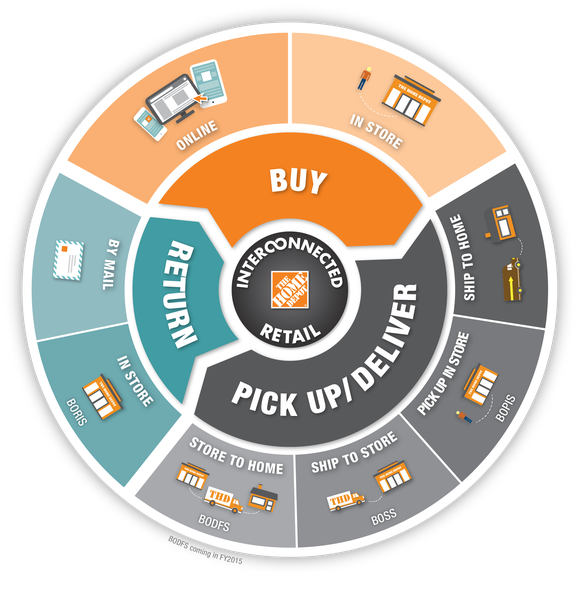 This strategy, which executives call "interconnected retailing," is paying off in spades. Digital sales are up 20% over the last six months and make up 6% of Home Depot's entire business (not far below the 8% level that marks e-commerce's share of all of retail). Rivals like Target and Costco, meanwhile, are bumping along at closer to 3% of revenue.

A comprehensive approach to retailing and strong execution around portfolio offerings aren't Home Depot's only two competitive advantages. Other factors I'd add to the list would be its valuable brand, its huge scale, and its financial fortitude.

None of these strengths completely protect the business from the next downturn in the housing market. But together they help explain why the company is outperforming rivals both inside and outside of the home improvement industry.