After the company announced that it plans to raise capital through a common stock offering, shares of Idera Pharmaceuticals (NASDAQ:IDRA) fell by 16% as of 3:30 p.m. EDT on Thursday.

The clinical-stage biopharma stated that it plans to raise up to $50 million through this common stock offering. Given that its current market cap is right around $275 million, that represents a dilution rate of over 18% for current shareholders.

Shares of Idera are down around 28% since the start of the year, so some investors might not be thrilled with the timing of this capital raise. However, even after today's drubbing, shares have actually rallied sharply from their mid-summer lows, so perhaps management feels that this is as good a time as any to beef up its balance sheet. 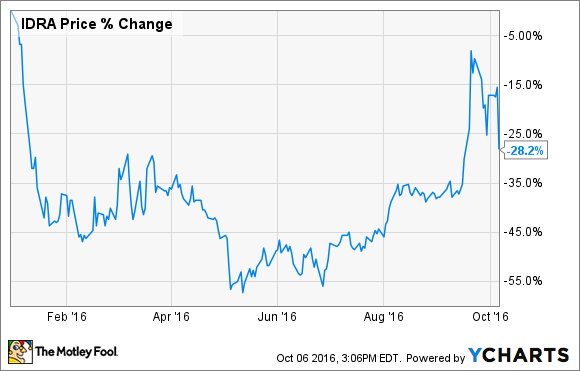 Idera produced a net loss of $26.3 million through the first half of the year, leaving it with only $64.1 million in cash as of the end of June. The company estimated that its cash balance would only be enough to keep its doors open into the third quarter of 2017, so shareholders should have expected that a capital raise would be in the cards at some point.

Regardless, the markets do not appear to be thrilled with the news.

Even though Idera has been publicly traded for more than 20 years, its most advanced compound is still just in phase 2 clinical development. As you'd expect, the company has had to dilute shareholders significantly over the last two decades just to stay in business: 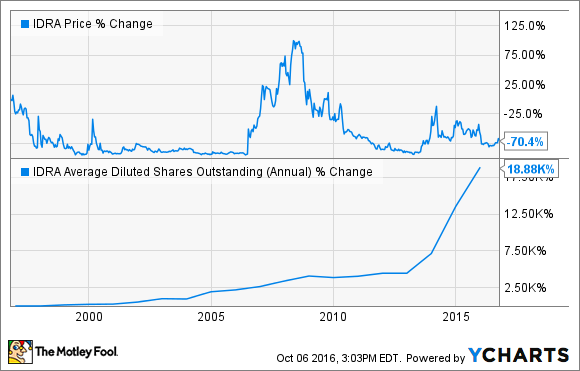 Even now it doesn't look like the dilution will stop anytime soon. Under a best-case scenario, it will still be several years before Idera's lead compound, IMO-8400, can find its way to market. After this capital raise, the company will only have about $116 million in cash on its books, which it will likely plow through quickly if it advances its compounds toward late-stage clinical trials.

Given all of that, I'd suggest that potential investors should approach this stock with a wait-and-see mindset.