Healthcare stocks in general have fared all right over the past 12 months, but there have also been quite a few losers among them. Big pharma stocks in particular have experienced mixed results, and three major drugmakers have performed especially poorly: Novartis (NYSE:NVS), Novo-Nordisk (NYSE:NVO), and Sanofi (NASDAQ:SNY).

The question for investors now: Are these stocks good bargains, fairly priced, or facing further declines?

The picture hasn't been pretty for any of these companies over the past year: Shares of each have fallen by double-digit percentages. 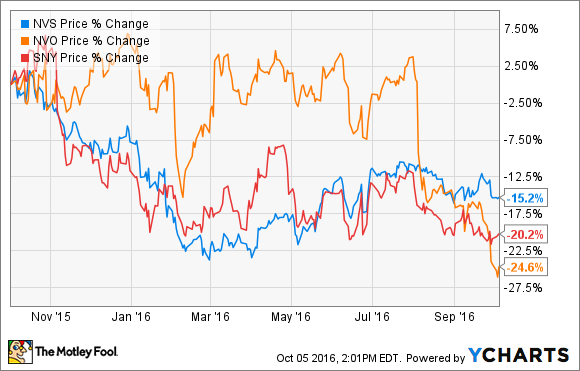 Novartis suffered the least damage, but its stock has still dropped by 15%. The primary challenge for the company stems from its recent loss of patent protection for blood cancer drug Gleevec. Unfortunately for Novartis, Gleevec was its top moneymaker since the patent on high blood pressure drug Diovan expired in 2015.

Stiff competition appears to be the biggest problem for Novo-Nordisk. The Denmark-based drugmaker lost a major contract for its Novolog insulin product. Sales for Novo-Nordisk's other insulin and hemophilia products have also faced headwinds due to increased competitive pressure, particularly from biosimilars.

The worst performer of the three has been Sanofi. Shares of the French pharmaceutical company have plunged 25% over the past 12 months. Sanofi's established prescription products and consumer health businesses have especially struggled. Sales for blood thinners Lovenox and Plavix are falling, an ominous sign given that those two drugs remain the biggest sellers for the company's largest segment: established prescription products.

Investors should ask this key question when thinking about buying a beaten-up stock: Is the price low for a persistent reason or only for a season? The answer to that question varies for each of these three big pharma stocks.

Novartis definitely has a daunting task ahead offsetting slipping Gleevec sales. However, the company owns several drugs that should help making up for the loss. Multiple sclerosis treatment Gilenya leads the group. Leukemia chemotherapy Tasigna and anti-inflammatory Cosentyx will also be key to Novartis' rebound. Sales of heart failure drug Entresto have gotten off to a slower-than-expected start, but it could emerge as a big winner. My take is that it will take time, but Novartis will eventually see better days.

As for Novo-Nordisk, the key to its future rides largely on diabetes treatments Tresiba and Victoza. Both products are experiencing strong growth. The company stands to benefit from alarming increases in the prevalence of diabetes. I like the long-term prospects for Novo-Nordisk, although I wouldn't expect the stock to surge anytime soon.

That leaves Sanofi. The drugmaker does have pockets of good news. Its Sanofi Genzyme subsidiary, for example, grew sales by over 20% year over year last quarter. The company's multiple sclerosis franchise is performing exceptionally well. I also like the potential for its collaborations with Regeneron.  Sanofi attempted to buy Medivation earlier this year, but lost out to Pfizer. I think the company needs a smart acquisition to rejuvenate its stock.

Best bargain of the bunch

Are these big pharma stocks bargains? Yes -- but only if you're looking at the long run. In the short term, share prices for all three companies could remain low.

My view is that the best of the bunch is Novo-Nordisk. I like the outlook for its pipeline and the growth trajectories for Tresiba and Victoza. Its dividend yield of 3.39% looks pretty attractive as well, and seems relatively safe. That's good news for investors, who can get paid to wait for this bargain to rebound.