Many tech investors are likely familiar with the top names in the virtual reality market -- Facebook, which sells the Oculus Rift; Alphabet's Google, which is building a VR ecosystem in Android; Sony, which will launch its PlayStation VR headset later this month; and AMD, which produces cheap "VR ready" GPUs for PCs. 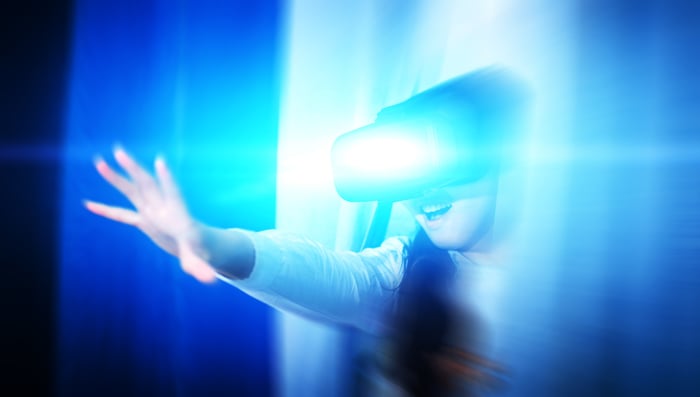 While these companies will all likely benefit from the growth of the VR market -- which research firm Digi-Capital claims could be worth $80 billion by 2025 -- none of them are compelling investments for income investors. Facebook, Alphabet, and AMD don't pay dividends, while Sony pays a paltry forward yield of 0.5%. However, there are two stocks which can give investors exposure to the VR market and solid dividends -- Microsoft (NASDAQ:MSFT) and Qualcomm (NASDAQ:QCOM).

Microsoft's core business still revolves around Windows and Office, but it's expanding aggressively into the augmented and virtual reality markets. The HoloLens, which started shipping to developers earlier this year, is a "mixed reality" headset that projects holographic images onto real surfaces. The developer kit still costs a lofty $3,000, but large companies like Volvo and Lowe's are already testing out the device. Volvo uses the HoloLens to let consumers virtually customize their dream cars regardless of in-store inventory, which lets dealers minimize inventory space to reduce real estate expenses.

Lowe's lets customers use the HoloLens to virtually visualize the changes that they want to make to their homes. Microsoft has also demonstrated the headset's use for remote communications via Skype and gaming possibilities with tabletop Minecraft and streamed Xbox One games.

The public release version of the HoloLens should be much more affordable, enabling more companies and mainstream consumers to purchase the device. When that happens, Microsoft can build a revenue generating app ecosystem for HoloLens -- something it repeatedly failed to do in the smartphone market.

That ecosystem probably won't generate meaningful revenue until the VR market matures, but Microsoft rewards patient investors with a decent forward yield of 2.7%. The company has hiked its dividend annually for the past 12 years, and it spent just 44% of its free cash flow (FCF) on those payments over the past year, indicating that it still has plenty of room to boost that payout.

Qualcomm (NASDAQ:QCOM), the biggest mobile chipmaker in the world, doesn't supply parts for high-end headsets like the Oculus Rift. However, smartphone-based headsets -- like Samsung's Gear VR, Google's Cardboard and Daydream, and Xiaomi's VR Play -- could become more popular among mainstream consumers because they're cheaper and aren't tethered to PCs or consoles.

That's why Piper Jaffray estimates that the Gear VR will be the top-selling headset this year with 5 million units sold, compared to 3.6 million Oculus Rifts, 2.1 HTC Vives, and 1.4 million PSVRs. Most of Samsung's current-gen devices which work with the Gear VR (Galaxy S7, S7 Edge, Note 7) are powered by Qualcomm's Snapdragon 820 chipset and its integrated Adreno 530 GPU.

Many current-gen flagship Android devices run on the 820 or the new 821, which is also paired with the Adreno 530. Qualcomm claims that the 821 is optimized for VR headsets by powering high-resolution displays, enabling low latency motion tracking to reduce motion sickness, and broadcasting 3D audio to "transport users to a virtual world."

As consumers demand better compatibility between smartphones and VR headsets, more OEMs should install Qualcomm's "best in breed" chipsets for smoother VR experiences -- thus bolstering the chipmaking business, which generates the lion's share of its revenues. That reputation could also widen Qualcomm's moat against cheaper rivals like MediaTek.

While VR won't be a major growth driver for Qualcomm over the next few quarters, it might become a significant one over the next decade. Meanwhile, Qualcomm pays a forward yield of 3.2%, and has hiked its dividend annually over the past 13 years. Its FCF payout ratio of 46% also indicates that it also has plenty of room to raise its dividend.

There's a lot of hype about the VR market, but the current forecasts could be too bullish. The steep price tag of headsets, limited library of games, and the physical space required to use VR apps could throttle their initial appeal. That would certainly disappoint companies that are investing heavily in the VR market.

Therefore, investors should consider investing in more diversified plays like Microsoft and Qualcomm. Neither company is heavily dependent on the VR market, but they could both profit from its growth. In the meantime, both companies pay investors solid dividends for simply waiting.