Royal Dutch Shell plc (NYSE:RDS.B) has an attractive 7% yield, more than double what you'd get from buying ExxonMobil  stock. With the shares near a five-year low, is Royal Dutch Shell a buy for income-hungry investors, or is the high yield a symptom of seriously elevated risks? Here's what you need to know.

The first thing to note about Shell is that the oil downturn has been pretty painful. The energy company's top line fell by a third between 2014 and 2015 and earnings fell by nearly 90% because of asset writedowns. Moreover, year over year top- and bottom-line results have been weak so far in 2016, too. So despite the fact that oil prices appear to have at least stabilized, Shell isn't out of the woods yet. This, however, isn't that much different from any other oil company. And, like any other oil major, Shell is working hard to adjust to the current environment. That's included cutting spending in a big way, which is operationally the right thing to be doing. Exxon, for example, has taken the same approach. The important takeaway here is to understand that the difficult oil environment is a big part of the backdrop to the question of whether or not Shell is a buy today.

Can't hide from the impact

The thing is, the top- and bottom-line numbers aren't enough to understand the impact of the downturn. For that you also need to look at the balance sheet. Although Shell has trimmed its spending, it hasn't stopped spending. No oil major can afford to do that because equipment needs repair and updating, and if you don't keep drilling you will, eventually, run out of oil and natural gas to sell.

And don't forget that Shell is still paying out a large dividend. The question you should be asking is, "How is the company doing all of this?" The answer is that it's stopped buying back its own shares, has chosen not to increase the dividend for more than two years, started paying a script dividend to those willing to take shares over cash, and taken on additional debt, increasing its leverage (or "gearing," as the company calls it). 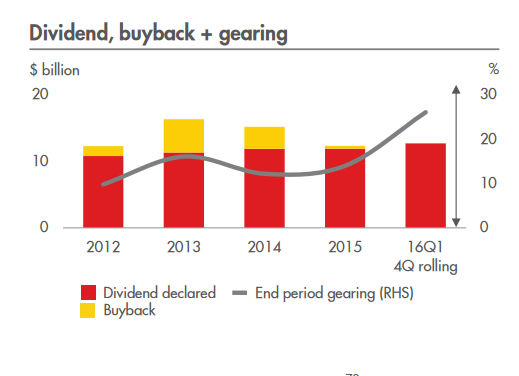 That's fine over a short period of time, and Shell is far from overleveraged, but if results don't improve, something will eventually have to give. And the most logical next step would be to cut the dividend in an attempt to preserve cash flow. Sure, the Shell has said it doesn't intend to do that, but things change.

So far it looks like Shell is in retreat mode, but that's actually not true at all. In fact, the company recently completed the roughly $50 billion acquisition of natural-gas-focused BG Group. This is a bold move and one that furthers Shell's shift toward natural gas. Most industry watchers believe natural gas demand is going to heat up in the years ahead as the fuel displaces dirtier options throughout the world, most notably coal in the power sector. 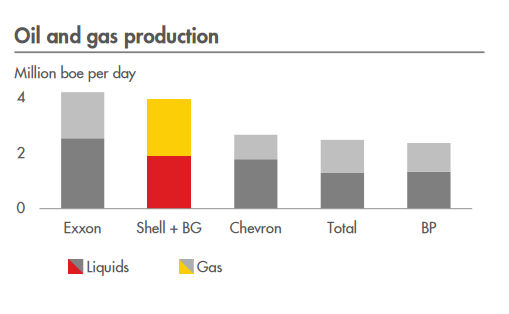 Step back, however, and look at this investment from a different angle. This isn't the type of thing you'd expect from a weakened company struggling to get by. It's a strategic portfolio shift made during a downturn meant to position Shell for the future. If everything works out as planned, Shell will come out the other side of the oil malaise stronger and, just as important, as one of the world's largest natural gas providers.

So what do all of these moving parts mean to investors? That's a hard call to make. First off, Shell isn't doing particularly better or worse than any other major oil company. They are all struggling today, they are all cutting costs, and they are all taking on additional debt -- if that worries you, then you shouldn't be considering Shell or any oil major. Shell is doing the right things to survive the downturn, but that's only worthwhile if you believe there's a future upturn in the cards.

If dividends are your thing, Shell clearly offers a nice yield and one that's well above what you can get from a company like Exxon. But you have to take the very real risk of a cut into consideration. Exxon, for example, has continued to raise its dividend through the downturn to show its confidence in the future. Shell hasn't increased its dividend for two and a half years. In other words, the yield alone probably isn't the only reason you should be buying Shell.

And then consider the long view, as highlighted by Shell's big BG acquisition. This is a company that doesn't think in years; it thinks in decades. If you believe that Shell is making the right move by investing in the future of natural gas, then it starts to look a lot more interesting. Moreover, if you can stomach the industry downturn and the risk that the dividend could get cut to preserve the company's long-term future, then Shell, trading around the lowest levels since the 2007 to 2009 recession, starts to look downright enticing.

So is Royal Dutch Shell a buy near its five-year lows? That depends on what you're looking for. Some investors should definitely stay away. But if your investment holding period is measured in decades and you can stomach some near-term risks, then Shell just might be a good fit for your portfolio.