Crude oil rose 3% this week, ending right around $50 a barrel. That rally fueled oil stocks, driving smaller drillers and service companies higher because they stand to benefit the most from the improvement. In addition, several drillers announced strategic transactions to bolster their balance sheets or growth opportunities. These two catalysts drove oil stocks higher. 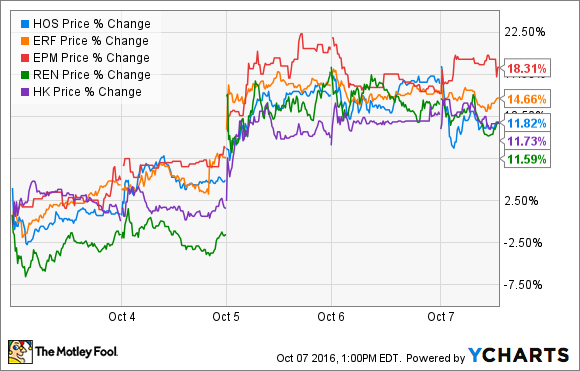 Mergers and acquisitions activity fueled this week's gains in both Resolute Energy and Enerplus. In Resolute Energy's case, it spent $135 million to acquire 3,293 net acres in the Delaware Basin, bolstering a key growth area. Meanwhile, Enerplus is reportedly going the other way, with Reuters saying the company is seeking a buyer for its Marcellus shale natural-gas assets; Enerplus expects that the sale could fetch up to $500 million, which it would use to repay debt.

Although rising oil prices helped, Evolution Petroleum rose this week after announcing the redemption of its 8.5% Series A Cumulative Preferred Stock, which it plans to fund with cash on hand. Evolution Petroleum noted that it has plenty of liquidity due to its undrawn credit facility, which carries a much lower interest rate than the preferred stock.

The rally in crude oil was the primary driver of the double-digit gains in Halcon Resources and Hornbeck Energy Services this week. Halcon Resources recently emerged from bankruptcy, which was the result of too much debt and the deep drop in oil prices. While it was able to eliminate $1.8 billion of debt and slash interest expenses by $200 million annually, Halcon still has $1.09 billion of debt to support; it needs elevated oil prices to generate cash flow for growth and ongoing debt maintenance. Hornbeck Offshore Services' finances were also challenged by weak oil prices, with the company seeing the borrowing base on its credit facility cut by a third this past July. While it has ample liquidity, Hornbeck Offshore needs higher oil prices so that its customers are incentivized to ramp up offshore drilling activities, which would flow down to more work for the company.

Little by little, the oil market is showing signs of improvement. The increase in oil prices is encouraging companies with access to capital to make acquisitions, while others are jettisoning noncore assets so they have cash to reinvest into core properties. That said, the market still has a way to go before the weakest players are back on solid ground.