Pushback against rising drug prices has caused the iShares Nasdaq Biotechnology ETF (NASDAQ:IBB) to lose 16% of its value this year. Yet while headwinds remain that could slow top-line growth across the industry, selling top-tier biotech stocks like Gilead Sciences (NASDAQ:GILD), Celgene Corp. (NASDAQ:CELG), and Regeneron Pharmaceuticals (NASDAQ:REGN) might not be the right decision. All three of these companies have lost significant ground this year, but each has catalysts brewing that could reinvigorate share prices. 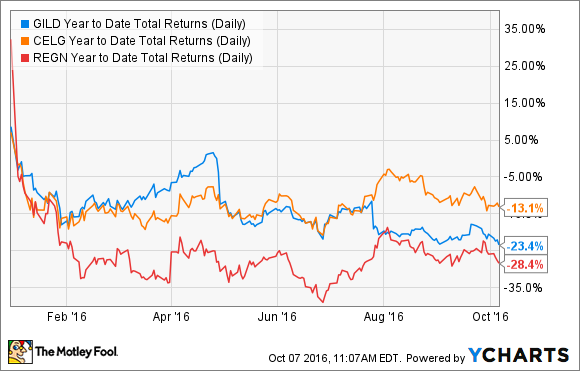 What's up with big biotech?

Over the past few years, the biotech industry has benefited from significant double-digit price increases, but revelations last year of triple-digit increases on medicines that have been available for decades have led to significant scrutiny.

News that Valeant Pharmaceuticals hiked prices on two heart-disease drugs it had acquired by hundreds of percentage points last year led to investigations that were largely responsible for an unraveling of the company's business model and a trouncing of its shares. Similarly, sky-high price increases on Mylan's EpiPen, a life-saving medicine for people with severe allergies, led to Congressional inquiries and public outcry that forced that company to revamp its EpiPen pricing strategy and caused its shares to drop significantly this year.

While Gilead Sciences, Celgene, and Regeneron haven't found themselves directly in the cross-hairs on pricing lately, each markets high-priced medicine responsible for billions of dollars in drug spending. And as a result, they haven't escaped the industry sell-off unscathed.

While biotech companies' ability to increase prices in the future will be more limited because of heightened scrutiny, these three biotech stocks don't need significant price increases on their current drugs to grow their top and bottom lines.

Gilead Sciences recently won FDA approval for its next-generation hepatitis C drug Epclusa, a drug that delivers nearly 100% cure rates and is being positioned to replace Sovaldi for hepatitis C genotype 2 and genotype 3 patients. The company is also conducting mid- and late-stage studies in large and potentially needle-moving indications, including non-alcoholic steatohepatitis (an increasingly common cause of liver failure) and rheumatoid arthritis.

Gilead Sciences is also in the midst of refreshing its entire HIV drug lineup: Its combination therapies will include a next-generation formulation of Viread that's safer and can be used in more patients.

Celgene's future growth may be even less dependent on price increases than Gilead Sciences'. Celgene's Revlimid maintains market share north of 50% in multiple myeloma, and a change to its label allowing its use in first-line treatment has meaningfully expanded its addressable market. The company is also benefiting from rapid adoption of Otezla, an oral psoriasis drug launched in 2015 that's off to one of the fastest starts ever in the indication: Otezla's sales jumped 170% in the past year, to $242 million in the second quarter.

Additionally, Celgene has inked a slate of collaboration deals with promising biotech upstarts, including Juno Therapeutics, that could fuel future growth. And it has potential blockbuster drugs including GED-0301, a therapy for Crohn's disease now in registration-enabling studies, and ozanimod, a promising multiple sclerosis drug.

Similarly, Regeneron Pharmaceuticals' Eylea sales aren't likely to falter anytime soon. Wet AMD is common in seniors, and given that baby boomers are turning 65 at a rate of 10,000 per day, it's likely that demand will continue to boost Eylea's sales. Eylea net sales in the U.S. increased 27% year over year to $831 million, and its global net sales increased 33% year over year to $1.32 billion in Q2.

Regeneron's R&D programs are kicking off a series of new therapies that could also drive sales and profit growth down the road. Last year, the company and its collaboration partner Sanofi SA (NASDAQ:SNY) won approval of the cholesterol-busting drug Praluent, and the two expect a FDA decision on their rheumatoid arthritis drug sarilumab later this month. Additionally, the FDA recently granted priority review to the duo's dupilumab, a therapy for atopic dermatitis (eczema); a decision on dupilumab is anticipated next March.

These companies' various catalysts make them intriguing, especially since their shares can be bought for less than they would have cost last year.

Short-term losses in these companies this year may have you thinking it's time to cut bait and move on, but that kind of thinking might not be profit-friendly in the long term. Each one of these stocks has stumbled in the past, yet returns for long-term investors who've continued to hold them have been significant.

Similarly, investors who bought shares in Celgene when Revlimid first won FDA approval in 2005 are sitting on a 624% return -- despite suffering through 28 separate months during which Celgene's share price fell by more than 5%, including five separate months when shares lost more than 15% of their value.

Also, investors who bought Regeneron in 2011 after the FDA's advisory committee unanimously voted to recommend Eylea for approval are up 619%, despite 17 different monthly declines of 5% or more (including a 22% drop earlier this year).

Undeniably, biotech investing is risky, and past success doesn't guarantee future success. But studies have proven time and time again that long-haul thinking outperforms short-term trading, and that suggests that rather than selling big-cap biotechs like Gilead Sciences, Celgene, and Regeneron, you might want to be buying.