Seadrill's founder could be its key to survival. Image source: Getty Images.

On Oct. 4, shares of offshore drilling contractor Seadrill Ltd. (NYSE:SDRL) rose as much as 30% on rumors that founder and largest shareholder John Fredriksen was ready to lend the company as much as $1.2 billion. Considering the company's current debt and concerns that its cash flows in coming quarters will put the company in dire straits, this came as great news for investors who have seen Seadrill's backlog of contracted work steadily dwindle with each passing quarter.

However, this isn't the first time the stock has climbed on rumors that Fredriksen was ready to increase his investment in the company. March, shares of Seadrill surged more than 160% in less than a week, after rumors that Fredriksen was raising cash to invest in the company. But since peaking on March 5, Seadrill stock has lost more than half its value -- even with the recent run-up on more Fredriksen rumors --  while the company's situation has arguably grown worse.

Fredriksen may (or may not) lend Seadrill any cash, but frankly it may not even be his financial support that matters the most.

Over the past year, Seadrill has made efforts to cut its costs in order to help it preserve cash and deal with debt obligations. At the same time, a prolonged downturn in demand for offshore drilling has steadily reduced revenues with each passing quarter: 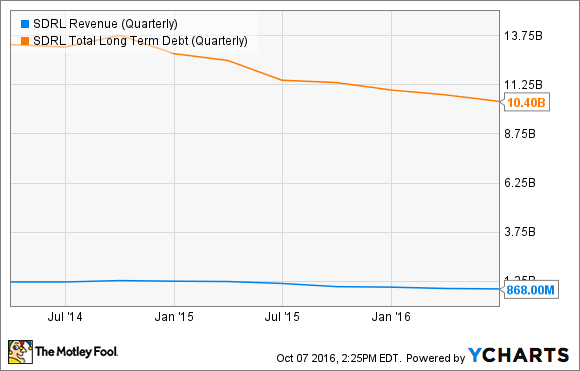 The company has been able to pay down a lot of debt over the past 18 months, and it also reached an agreement with its lenders recently to delay its near-term debt maturities by six months. But with a $400 million payment due in December and another $2 billion due in June 2017, Seadrill is quickly approaching a problem that its $1.3 billion in cash on the balance sheet can't solve.

This is exacerbated by an offshore drilling market that has remained stubbornly weak, with producers slashing drilling budgets and showing little indication that they are ready to start investing offshore again anytime soon.

The case for Fredriksen's financial support

John Fredriksen, through control of various entities and a family trust, owns nearly 25% of Seadrill's common stock. And if the company were to fail, or declare bankruptcy in an effort to reorganize, Fredriksen's common stock position would be affected in the same manner as every other shareholder -- which is to say it would probably become worthless. For this reason, it's certainly in his interest to prevent the worst-case scenario from happening.

Furthermore, Fredriksen probably has the cash available if needed. According to Bloomberg, he had $5.7 billion in cash and other assets available in March, putting him in a financial position in which he could easily lend the company money to help it address its upcoming maturities while also retaining cash to support operations until demand for offshore drilling recovers.

The potential gains for Fredriksen could be enormous, even with loan terms friendly to Seadrill. The company owns some of the best assets in offshore drilling, particularly its high-specification fleet, which should be in high demand when the market recovers.

Will Fredriksen have to step up?

As things stand today, it's not clear whether Fredriksen will even have to lend Seadrill any cash. The company has enough cash to handle the $400 million it owes at year's end, and lenders have already demonstrated a willingness to work with the company, having deferred its current maturities in an effort to create more time to negotiate a deal. And frankly, Fredriksen's capital may not have to be part of the answer.

West Epsilon was the most recent ship to see its contract canceled early. Image source: Seadrill.

Furthermore, it's possible that Fredriksen's most important role isn't going to be financial, but influence. After all, he is one of the largest shipowners in the world, with his holdings carrying far beyond his stock ownership of Seadrill. Over the past year, Fredriksen's status with shipbuilders has payed off for Seadrill, helping the company delay newbuild deliveries, and the billions of dollars in obligations that come along with them.

In other words, Fredriksen's influence with bankers -- as has proved to be the case with shipbuilders -- could be even more important than his money.

Financial support or not, investing in Seadrill is a bet on Fredriksen

There's no getting around the reality that the offshore market remains a mess. It may only just now be reaching bottom, and historically it has recovered later in the cycle than other segments. Because of this, Seadrill absolutely must reach a deal with lenders to either refinance its upcoming maturities, or at the very least defer them further while preserving as much of its cash as possible. After all, the current state of the offshore market could have the company burning more cash than it generates within a few quarters.

And whether his support is financial, through influence with bankers, or -- most likely -- some combination of the two, there's little doubt that the company's ability to weather this storm and come through it a profitable investment rests on John Fredriksen's involvement. Whether he's willing to make a further financial commitment, however, is not yet clear. But either way, buying shares of Seadrill with this much risk and uncertainty hanging over the company is squarely a bet that Fredriksen will act if the company needs. It's up to you to decide if that's a risk you're willing to take.