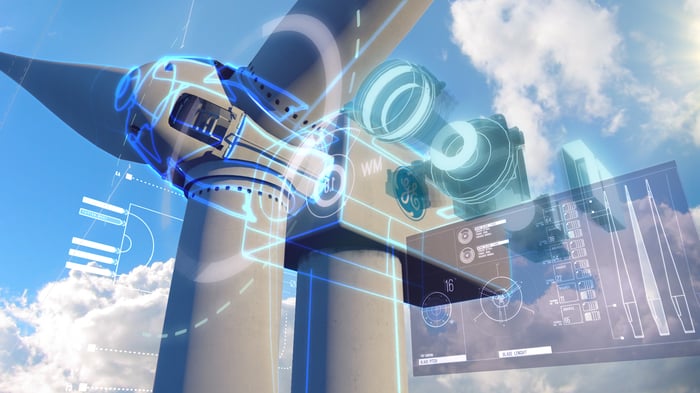 One of the biggest arguments against buying General Electric's (NYSE:GE) stock is that the company's revenue base is so large that its various growth initiatives aren't likely to move the needle. After all, the industrial giant expected to generate approximately $126 billion in revenue this year. A 1% increase in revenue equates to nearly $1.3 billion.

At this level, it's challenging for GE to drive meaningful revenue growth without the cooperation of the industrial economy, which has been sluggish at best. Ongoing weakness in China, resource-based economies, and Europe has kept a lid on global industrial production -- a trend that management thinks will likely persist for some time.

However, despite revenue headwinds that GE faces, there is a simple reason to consider buying shares. Essentially, if GE can successfully transform itself into a digital industrial company and is able to generate a larger percentage of its earnings from services revenue, the quality of its earnings should improve. And since investors tend to assign higher premiums to companies with higher-quality earnings, GE's stock could rise.

For a little over a year, GE has been divesting the majority of GE Capital to exit the traditional financial services business and become more focused on industrial initiatives. Of the $200 billion in financial assets GE pledged to divest, the company has announced about $181 billion in signings and $168 billion in closings. CFO Jeff Bornstein noted on GE's second-quarter earnings call that it expected to sign the remaining assets during the third quarter. When all is said and done, GE aims to generate about 90% of its operating earnings from industrial activities in 2018, up from 58% in 2014.

In addition to this divestment, GE has been positioning itself to become the world's leading digital industrial company. It's taken on various initiatives that leverage the industrial internet -- the Internet of Things (IoT) for industry. This entails building out an expansive suite of digital offerings that help it and customers improve the performance and reliability of industrial equipment. With a robust digital services portfolio that offers customers a compelling potential return on investment, GE has the potential to generate long-term streams of recurring revenue.

In other words, GE is employing a razor-and-blades business model, with industrial equipment sales fueling digital services sales. The larger GE's recurring revenue base grows as a percentage of total revenue, the more predictable and stable its revenue -- and therefore earnings -- become. After all, services-driven revenue tends to be less sensitive to economic jitters and usually commands a higher operating margin than equipment sales.

In the first half of 2016, 46.4% of GE's industrial revenue came from services, up from the 43.9% it represented last year, while services made up a greater percentage of total orders, increasing from 47.2% to 52.1%. Although a few data points aren't indicative of a full-blown trend, GE appears to be moving in the right direction.