The cable and broadband industries have gone from stable monopolies or near-monopolies to wide-open industries where anything may happen.

Frontier Communications (OTC:FTR) stands poised to benefit from some of those changes if the company can position itself correctly. In all of its markets, the pay-television and internet provider serves as an alternative to an established incumbent. That gives the growing company a unique opportunity to grow by simply being a viable alternative.

The challenge is that aside from offering some sometimes-confusing (but alluring) teaser prices to get consumers to switch, Frontier has not really been an innovator. The company has a big opportunity ahead of it -- one that could cause its stock to rise -- but to make that happen, the company has to start acting differently than it has been.

If Frontier wants to raise its value and increase its stock price, it has to stop acting like a traditional cable/internet provider. 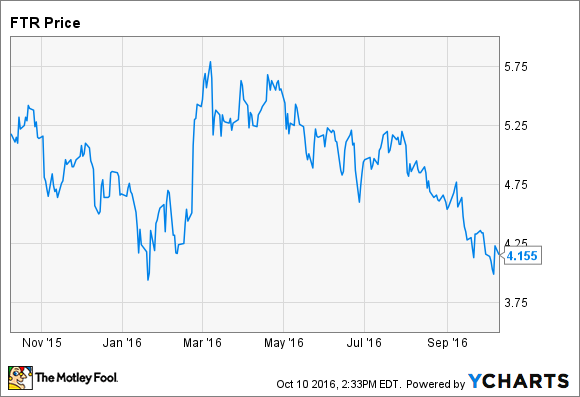 Frontier stock is near its lows for the year. Image source: YCharts.com.

It's hard to know which consumers hate more, cable companies or wireless providers. In the phone space, T-Mobile (NASDAQ:TMUS) CEO John Legere used just how much the public disliked his rivals to build a business mode. He cast his company as "The Un-carrier," a brand that does not do many of things that make people not like his rivals.

Frontier, it should be noted, has not done anything to copy the T-Mobile playbook. Even though it's an alternative to bigger, more established carriers in all of its markets, the company's chief marketing strategy has been offering lower prices on a two-year teaser deal.

If the company wants to gain some real sales traction, it should stop acting like a smaller version of its rivals. By dropping fees and offering clear pricing and more choices, all while pointing out that it's doing something the bigger players in the space won't like, Frontier could build itself into an actual alternative.

Since it acquired Verizon's former wireline properties in California, Florida, and Texas in April, the company can now spread its costs over 3.3 million more voice connections, an extra 2.1 million broadband connections, and 1.2 million new FiOS video subscribers. The company expected that to save it money, helping it toward profitability, but the numbers are better than expected.

"Following the successful cutover of the newly acquired assets, we achieved annualized integration cost synergies of $1 billion in the second quarter," said CEO Daniel McCarthy in the company's Q2 earnings call, which was transcribed by Seeking Alpha (registration required). "This is a substantial outperformance relative to our original day one target of $525 million. We have also raised our total synergy target to $1.25 billion, which is considerably above our prior $700 million target."

Frontier actually cut its loss in Q2, 2016 to $27 million from $28 million in the same quarter a year ago. That's encouraging because if the company can hit $1.25 billion in annualized savings, it would likely have seen a profit, at least in Q2.

Cost-cutting and synergies alone won't bring about sustainable profitability, but showing some light at the end of the profitability tunnel should encourage shareholders. It would also show that the strategy of spending $10.54 billion to more or less double in size in order to spread costs out over a bigger user base has actually paid off.

Put itself up for sale

Frontier has been oddly absent from most of the consolidation rumors in the cable and internet industries. That may be in part because the company has built most of its business on wireline technology that phone company, cable, and ISP providers have been eager to get rid of.

That said, Frontier has invested heavily in its infrastructure, and while it may not fit in with another player in the space quite as easily as some recent purchases have, the company still brings a user base of nearly 6 million customers, according to its Q2 earnings report. Of that user base, more than 4.5 million are internet subscribers, while over 1.62 million pay for television services.

That broadband base alone would be enough to push Charter Communications ahead of Comcast for the top spot as an internet provider. And if that proves to be a meaningless title, it's enough subscribers to make lesser players like Altice and CenturyLink more credible rivals for the big boys.

Frontier may not be the prize Time Warner Cable was, but it's fairly similar to Cablevision, albeit less regional, which sold to Altice for a 22% premium of its share price on the day the deal was announced, according to Reuters. Whether a Frontier deal is worth more (or less) depends upon how much market interest is out there, but it's hard to think the company wouldn't fetch a sizable premium should it simply auction itself off.