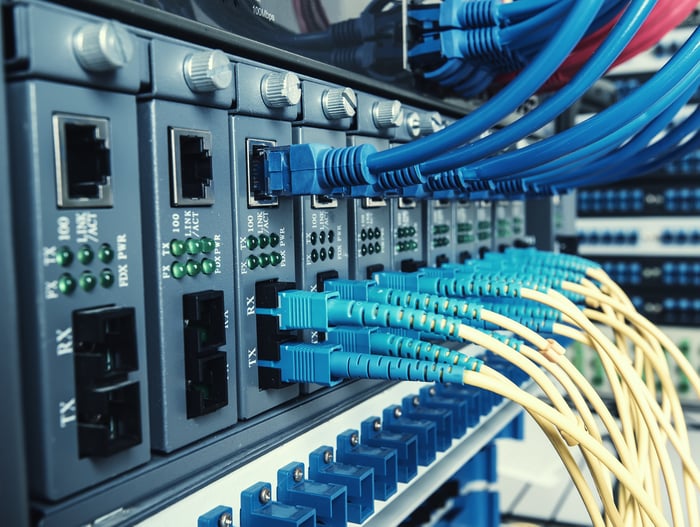 Who doesn't love a high-paying dividend stock in their retirement portfolio? In telecom players like Verizon Communications (NYSE:VZ) and Frontier Communications (OTC:FTR), we can nab shares yielding 4.4% and 10.1%, respectively. With payouts like that, what's not to like?

Actually, there are some major differences between the two. If we break them down to see which is the smarter investment, the answer becomes pretty obvious.

Telecoms are a different beast than most investments. Because there are enormous up-front investments that companies need to make to build out their network and infrastructure, debt loads are usually very high. Because of this, it's important that companies are able to produce enough free cash flow to both pay off their debts, and have a little left over for a dividend.

If we look at the balance sheets of these two companies, you'll get an idea for what I'm talking about.

At first blush, Verizon's debt seems staggering compared to Frontier's. But we need to remember that the company is valued at almost 40 times the size of Frontier. Additionally, Verizon is generating more than enough free cash flow (FCF) to allow the company to meet its debt obligations.

Frontier, on the other hand, is waiting to see if some of its most recent acquisitions from Verizon and AT&T will start paying off. Without a record of robust FCF growth from Frontier's acquired properties in California, Florida, Texas, and Connecticut, Verizon is the much stronger choice.

In the business world, there is perhaps no variable more important than a company's sustainable competitive advantages, sometimes referred to as a "moat." Without a moat, competition can come in, offer the same product, and steal a company's business. Of course, a business can counter by lowering its prices even more, but that just creates a race to the bottom.

Here again, Verizon has a substantial lead. According to Statista, Verizon holds a 35% share of the U.S. wireless subscription market, and it also offers high-speed Internet solutions to residential and business customers. Frontier, on the other hand, is in the middle of trying to reshape itself from a landline player to a smaller version of Verizon and AT&T. It has purchased the former's operations in Texas, California, and Florida, and the latter's interest in Connecticut, but we can't yet tell if those acquisitions will actually be beneficial to shareholders.

There are lots of ways to value a stock. Here are three of my favorite ratios to examine.

Here again it seems obvious that Verizon is the better choice. I think the FCF metric is the most important here, as it shows what the company is being valued at relative to the amount of cash it is able to pocket every year.

Furthermore, Verizon's dividend is in much better shape. Over the past 12 months, only 55% of free cash flow (FCF) has been used to make the quarterly payments. At Frontier, the dividend payout is much larger than FCF -- 370% the size of FCF,  to be exact. That's a troubling sign for those who are counting on the company's dividend.

Management had said that recent acquisitions would eventually enable FCF to grow, but with customers reporting terrible service from Frontier, I'm not convinced that will be the case.

Clearly, if you're looking for a good dividend stock, I think Verizon is a better bet. Though Frontier's 10.1% yield is enticing, I simply don't think it will remain that high -- it's just not sustainable at current levels. And there's nothing to be upset with when you get Verizon's healthy 4.4% yield.