Wynn Resorts (NASDAQ:WYNN) and MGM Resorts (NYSE:MGM) are two of the most well-known companies in gaming with resorts in the two largest markets in the world: Las Vegas and Macau. But they're very different companies from an investment perspective.

When deciding which company is best for your investment dollars, investors need to think about what risks gaming operators face -- and where the upside is for future growth.

What these companies are

Three things separate Wynn Resorts and MGM: the customers they serve, where they have resorts, and their size.

Wynn Resorts caters primarily to high-end consumers who spend a lot of money gambling or on hotel rooms, restaurants, and shopping. To give you an idea of how this impacts results, in Las Vegas, Wynn generated $4,450 in gaming win per table per day in the second quarter, and it made $28,239 on VIP tables in Macau. MGM doesn't break out those figures, but Las Vegas Sands (NYSE:LVS) generated $1,784 in win per table per day in Las Vegas and $10,124 per table at Venetian Macau.

The locations MGM and Wynn operate in are similar, but they're weighted very differently. MGM Resorts gets a vast majority of its revenue from the Las Vegas Strip, but it has a presence in Macau as well. Wynn Resorts' exposure is flipped, with it generating most of its revenue in Macau.

MGM Resorts is also a much bigger company than Wynn Resorts, as you can see below. That's in large part because it owns over a dozen resorts, while Wynn Resorts just opened its third distinct property in the Cotai region of Macau. 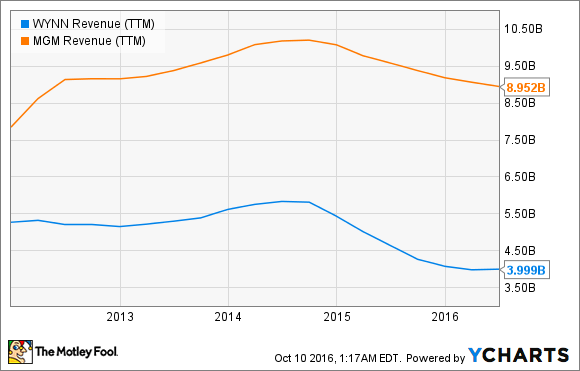 What will MGM and Wynn look like in the future?

As they stand today, MGM is bigger, more stable, and a better value for investors, trading with an enterprise value/EBITDA ratio of 10.1 compared to 14.7 for Wynn. But Wynn may have more growth ahead.

The $4.2 billion Wynn Palace recently opened in the Cotai region of Macau, and it could contribute between $500 million and $1 billion in EBITDA annually to Wynn Resorts. There's also Wynn Boston Harbor, a $2 billion resort near downtown Boston that just began construction. When completed, the two resorts could more than double Wynn's revenue and EBITDA.

MGM Resorts has a property nearing completion in Cotai, but it probably won't make as much money as Wynn Palace (based on Wynn outperforming neighboring MGM on the Macau Peninsula and in Las Vegas) and is being added to a larger revenue base. The leverage Wynn gets is simply bigger because it's a smaller company.

With that said, if Macau's gaming market weakens, or Wynn Palace disappoints, that same leverage can be a flaw in Wynn Resorts' business.

The winner of this duel

Whether you like MGM Resorts or Wynn Resorts will really come down to whether or not you think Macau is set up for growth in the next few years. If it does grow, Wynn Resorts will be the best stock because it has more exposure to Macau.

If Macau gaming revenue falls, or even stays flat, the consistent base MGM Resorts has in Las Vegas will be its greatest strength. The company will be less volatile than Wynn Resorts as a result.

Given the uncertainty ahead in Macau, I think MGM Resorts is the better stock for shareholders today. But keep an eye on Macau for signs of growth, because that could change the position of these two companies very quickly.