Warren Buffett is the world's most successful investor, but just because he takes a long-term approach to managing Berkshire Hathaway's (NYSE:BRK.B)(NYSE:BRK.A) $130 billion investment portfolio doesn't mean that he doesn't sell stocks. The Oracle of Omaha will exit stakes in companies when he thinks the long-term prospects have weakened. Three Motley Fool contributing writers think that's exactly what could happen with the stocks below.

Daniel Miller: If you've glanced over the list of companies Warren Buffett owns, there aren't too many duds. And while I don't consider this next stock a dud by any means, I think there are reasons Buffett might continue to unload shares of Suncor Energy Inc. (NYSE:SU) -- he most recently sold 7.7 million shares, reducing his stake by 25%.

One of the bullish arguments in favor of Suncor is that it's well-suited for the current environment given the strength of its balance sheet. But the problem is that the company also recently diluted its existing shareholders by issuing new stock in order to finance its expansion. Buffett would be excused for not being pleased. 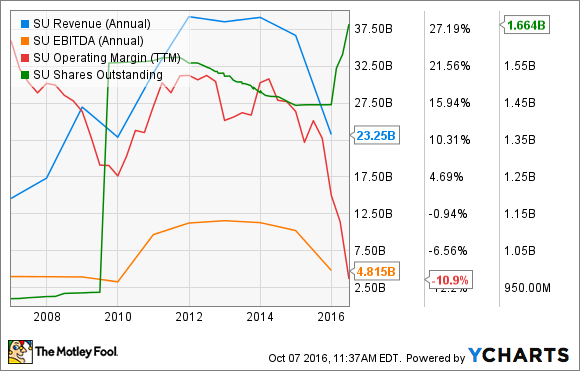 A great company at a high price

Tim Green: Berkshire Hathaway owns nearly $650 million worth of Costco (NASDAQ:COST) stock. The retailer is, in many ways, a quintessential Buffett stock. Its business model allows it to charge prices that traditional retailers can't match, giving Costco a cost advantage. And its membership is extremely sticky, with a low churn rate ensuring that those membership fees keep coming in year after year.

There's little doubt that Costco is a great company, but the stock has soared over the past few years to the point where Berkshire's capital may be better off elsewhere. Costco trades for nearly 30 times earnings, twice as high as Wal-Mart (NYSE:WMT), a valuation that requires substantial growth in order to be justified.

Buffett is generally not one to sell a stock simply because it gets expensive, so Costco will probably remain in Berkshire's portfolio for the long haul. But investors considering buying shares of Costco simply because Buffett owns the stock need to be aware of the high price they would be paying.

Todd Campbell: By reducing his position significantly last quarter, Buffett continued to signal to investors that he's souring on Wal-Mart and since little has changed at Wal-Mart in the past three months, I think there's a good chance he unloads the rest of his stake.

In the past year, Buffett has continuously praised Amazon CEO Jeff Bezos' business acumen, and in May, Buffett suggested to CNBC that Wal-Mart playing hard-ball with suppliers suggests it's under pressure that could lead to a price war, which would further weigh on Wal-Mart's performance.

Given Buffett's admiration for Bezos and his substantial sales of Wal-Mart shares, I don't think it's a stretch to think Buffett's stake in Wal-Mart is going to continue to shrink.