Investors in Merrimack Pharmaceuticals (NASDAQ:MACK), a small-cap biotech focused on oncology, had a September to smile about. The company's shares rebounded sharply from their drastic fall in August, rising more than 38% during the month, according to data from S&P Global Market Intelligence. 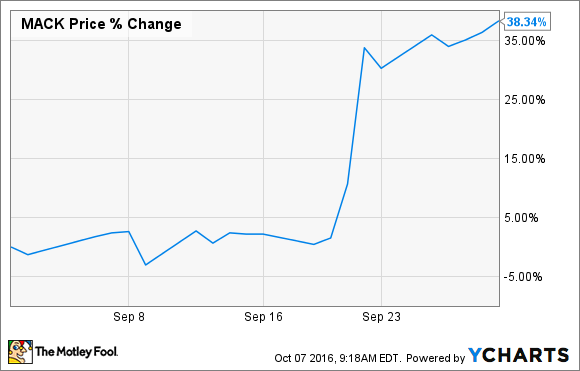 Merrimack's shares jumped after script data for August showed that demand for Onivyde --the company's treatment for metastatic pancreatic cancer -- is growing nicely. Gross sales of Onivyde during August came in at $6.1 million, which represents 26% growth over the $4.8 million that was recorded in July. For perspective, Merrimack recorded total gross sales of $14.8 million in the second quarter and $11.3 million in the first.

We recently learned that Merrimack is going through a massive corporate restructuring in an effort to save money. It laid off 22% of its workforce, and its CEO resigned. The company expects that this move will save more than $200 million over the next two years.

As painful as those cuts were to make, it is understandable why the company decided to take this action. As of the end of the second quarter, Merrimack only had $82.7 million in cash on its books. That's a small number when you consider that its quarterly loss was more than $50 million. In addition, the company holds $215 million in long-term debt.

Looking ahead, Merrimack should be hearing soon about Onivyde's approval in Europe. If that goes well, then its international partner, Shire, should be launching the drug soon after. That would be welcome news, and it could go a long way toward helping the company grow its top line.

Still, Merrimack remains in a difficult financial position even after accounting for the corporate restructuring. That indicates that a capital raise could be coming soon, which is an unappealing prospect given the company's poor year-to-date performance. For that reason, I'd suggest that potential investors take a pass on this stock for now.