Chris Neiger
(TMFNewsie)
Author Bio
Chris has covered Tech and Telecom companies for The Motley Fool since 2012. Follow him on Twitter for the latest tech stock coverage. Follow @tmfnewsie
Editor's note: This article originally appeared with the headline "3 Incredibly Cheap Virtual Reality Stocks," and the sections discussing AMD and Invensense incorrectly discussed their valuations as "cheap" relative to the tech industry based on their price-to-earnings ratio. The article has been updated.

The virtual reality market is growing quickly. Right now there are an estimated 43 million active virtual reality (VR) users, but that's supposed to skyrocket to 171 million by 2018, according to Statista. That growth is spurring small and large technology companies alike to focus more of their attention and technology into VR pursuits. For investors looking to tap into the VR market Advanced Micro Devices (NASDAQ:AMD), Sony (NYSE:SONY), and InvenSense (NYSE:INVN) should certainly be on your radar. Let's take a look at what each company is doing with VR.

Advanced Micro Devices made some huge strides in the virtual reality space last year when the company released its Radeon RX 480 graphics card, priced at just $199.

Even at that price, the graphics card can handle the most powerful VR headsets on the market -- the Oculus Rift and HTC Vive -- and gives gamers a cheap way to jump into the best VR experience around.

An ArsTechnica review of the RX 480 said that for $200 the RX 480 is the "best graphics card you can buy."  Unfortunately for AMD, the company's bitter rival NVIDIA (NASDAQ:NVDA) released it's own budget card a few months later that Ars said was "the new best budget graphics card."

But that shouldn't scare off investors. AMD's card is still $50 cheaper than NVIDIA's lowest-end GTX 1060 card, and it can hold its own against NVIDIA's card for many VR games, according to ArsTechnica.

Additionally, AMD is making some gains against NVIDIA in the discrete GPU market space. NVIDIA is still the clear leader, but AMD's gains should help the company gain a bigger share of the VR component space. 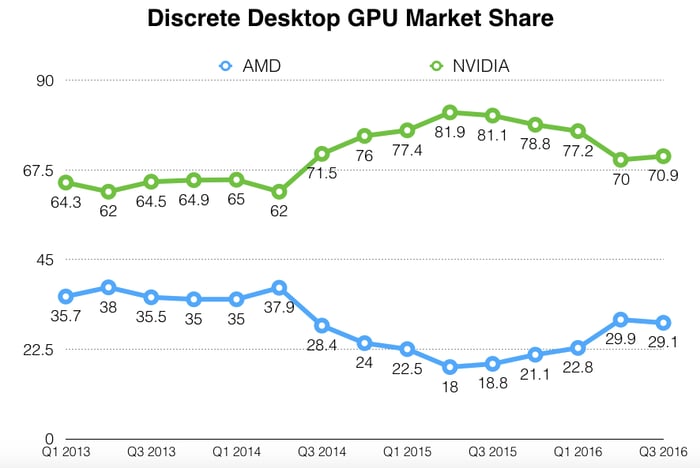 The other huge upside to AMD is the fact that the company supplies the graphics cards inside of Sony's PlayStation 4. The company has sold more than 53 million units so far and it's one of the best VR-ready consoles on the market. Sony is making big strides in VR (which I'll talk about in a minute) and any increase in sales for PS4, and its recently released variations, could help graphics card sales for AMD as well.

Sony's stock is currently trading at 15 times its forward earnings, which is cheaper than the tech industry's average P/E ratio of 26. And compared to another major VR company focusing on hardware, Oculus-owner Facebook (NASDAQ:FB), Sony is significantly cheaper. Facebook currently has a forward P/E of about 20.

Facebook is playing the long game in VR with the Oculus Rift headset, which is priced at the high end of the market at about $500, after receiving a $100 price cut in March. Meanwhile, Sony's new PlayStation VR headset costs just $399. That gives Sony a price advantage over Facebook and some other VR headset hardware makers, but it also has another advantage.

Tens of millions of PS4 consoles are already in consumers' homes. That makes the barrier to adopt VR technology much lower than for many PC users (which is what the Oculus Rift requires). Only 1% of computers sold this year will be VR-ready, while Sony already has 40 million console users that could potentially jump into VR right now.

InvenSense's motion sensors have been in the most popular smartphones for years, but the company is looking to the virtual reality market to spur new growth.

InvenSense released its new ICM-20603 6-axis inertial sensor over the summer, aimed squarely at the augmented and virtual reality markets. The company says the sensor gives VR headsets tighter alignment for head-tracking motions as well as faster refresh rates, both of which are an important part of a good VR experience.

InvenSense CEO and President, Behrooz Abdi, said on the company's fiscal Q1 2017 earnings call that, "In the gaming and virtual reality segments, or VR, we have extended our market share with our latest 6-axis motion sensor, and are currently ramping with a game controller at a tier-1 gaming OEM."

Abdi went on to say that IHS estimates head-mounted displays are expected to grow at a more than 50% compound annual growth rate over the next four years and that InvenSense could benefit from the need for high performance motion tracking.

There's plenty of places to benefit from VR

Virtual reality is expected to become a $70 billion business by 2020, according to TrendForce. And all of that growth is convincing nearly every major technology company to make at least some sort of move into the space.