Adidas (OTC:ADDYY) is on the rise, with recent sales and earnings growth far outpacing its rivals. While most of this recent growth is attributed to longtime CEO Herbert Hainer, bullish investors are looking for new growth to come from his successor, Kasper Rorsted. Officially taking the reins on Oct. 1, Rorsted has already been shadowing Hainer for a few months and begins his tenure poised to continue Adidas' momentum. Here's what we know now, and what to watch going forward.

Adidas has been around for 65 years. It has become a dominant force in worldwide sports during that time, but after losing its position as largest sports-apparel company in the world to Nike (NYSE:NKE) more than two decades ago, and then slipping to third place in the U.S. behind Under Armour (NYSE:UAA) (NYSE:UA) in 2014, the company has been seen by many analysts as on a slow descent.

However, over the last year, Adidas has started to surge once more. So far in 2016, the company has reported great sales growth and even more impressive earnings growth. During the most recent quarter, Adidas posted sales up 13% year over year and earnings per share up 98%.

To reignite earnings following its sluggish last decade, Adidas has started to kick into high gear using individual athletes like Denver Broncos player Von Miller, as well as non-athlete celebrities like musical artists Kanye West and Pharrell Williams, to market its gear on and off the field. Both of these strategies have been successful in their own right, and we've even seen examples of strategy crossing, such as this image of Von Miller showing off Adidas cleats codesigned by Kanye West.

Investors get excited for Rorsted's tenure

Adidas revealed in January that Hainer would be stepping down. The announcement that Rorsted would be taking over immediately drove speculation and interest from bullish investors excited to see what this new change in leadership would bring. Rorsted is the former CEO of consumer brands company Henkel (OTC:HENKY), where he successfully divested around 80% of the company's nonperforming segments and brands to focus only on those driving earnings growth.

Investors are excited about the prospect of Rorsted working to cull those parts of Adidas that make the company bloated without providing much earnings potential, something Adidas already said it wants to do with the planned divestiture of its golf business. Another reason investors are looking forward to Rorsted, a Danish citizen now leading the German company, is that he has spent ample time working for companies in the U.S. like Compaq, Oracle, and Hewlett-Packard; many investors believe this should help Adidas focus more on the U.S. market, where it recently passed Under Armour to take back its second-place spot behind Nike.

Nike and Under Armour, along with other global rivals, are not going to take Adidas' recent competitiveness lying down, of course. Each is working on its own strategies to fight for market share, especially in places like China that could define which company is the best-performing in the years to come. Still, Adidas' transition in the last year has been impressive, and the sales and earnings momentum in the last quarter will get Rorsted started on the right foot.

There is work to do. Adidas' operating margins are considerably lower than Nike's, and almost all of its recent sales growth has come from casual wear, which fashion analysts note can be fickle as trends come and go. 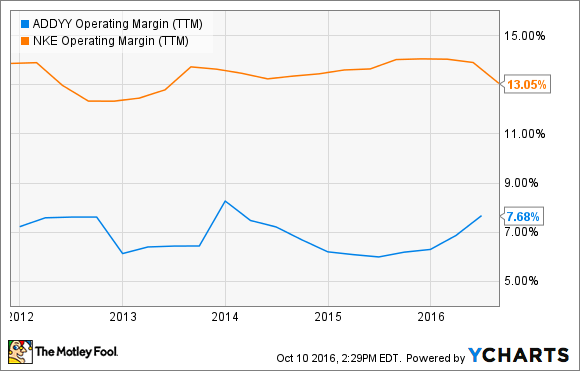 Investors have so far believed that Rorsted could be the one to do the necessary work to prepare Adidas for years of growth, pushing the stock up over 80% since he was announced as Hainer's successor in January. In the quarters and months to come, watch how Rorsted continues to lead Adidas' sales growth, while also increasing the company's profitability and long-term competitiveness.