Intel's business model has traditionally been to focus on designing, manufacturing, and selling its own products (mainly high-performance processors for personal computer and data center applications) on the most advanced technologies available to it.

TSMC, on the other hand, manufactures all kinds of chips for an extremely wide variety of customers and applications across a range of manufacturing technologies -- from cutting edge to technologies that first went into production more than a decade ago.

Both business models have been wildly successful, and as of writing, both TSMC and Intel sport very similar market capitalizations ($155 billion for TSMC, $182 billion for Intel). That being said, there is one way Intel appears to be trying to mimic TSMC.

Some background on Intel's prior strategy

The idea behind this strategy is actually quite simple. Intel says each successive manufacturing technology generation delivers a lower cost per transistor (a chip is made up of hundreds of millions, if not billions, of transistors), so it makes sense from an economic perspective to do this. Additionally, newer manufacturing technologies offer better performance/power characteristics, which helps make products more appealing.

Despite all of this, based on both disclosures from Intel as well as leaks surrounding Intel's future products, it would appear that the company no longer intends to pursue the strategy of "moving as much volume over to the newest manufacturing technology as quickly as possible."

How Intel is changing gears -- and why

During the first half of 2018, I expect Intel's product line to look something like this:

Why is Intel doing this? I believe the answer lies in the fact that Intel's claims of lower cost per transistor are normalized for manufacturing yields. That is, those cost-per-transistor figures assume a similar level of technological maturity between the newer manufacturing technology and the older-generation technology.

However, the reality is that Intel seems to be facing increasing difficulties in ramping its latest manufacturing technologies up at high yield rates.

For some product segments (e.g., anything in which battery life is critical), Intel really needs the power-saving benefits of newer manufacturing technologies, so the company has little choice but to transition to those new technologies, regardless of yields. However, some products aren't as power-sensitive (e.g., desktops), so Intel can afford to do what it's doing with its upcoming Coffee Lake part and simply implement a newer architecture in a more mature manufacturing technology.

This has the effect of keeping a large portion of its chip shipments on a more cost-effective technology, which helps to balance out the negative margin impact from transitioning some of its products to newer manufacturing technologies.

Moreover, with a large base of revenue coming from "mature" technologies, Intel can more quickly advance key performance/power-sensitive product lines to next-generation manufacturing technologies while minimizing the impact of those products to overall gross profit margins.

This is exactly how TSMC does it 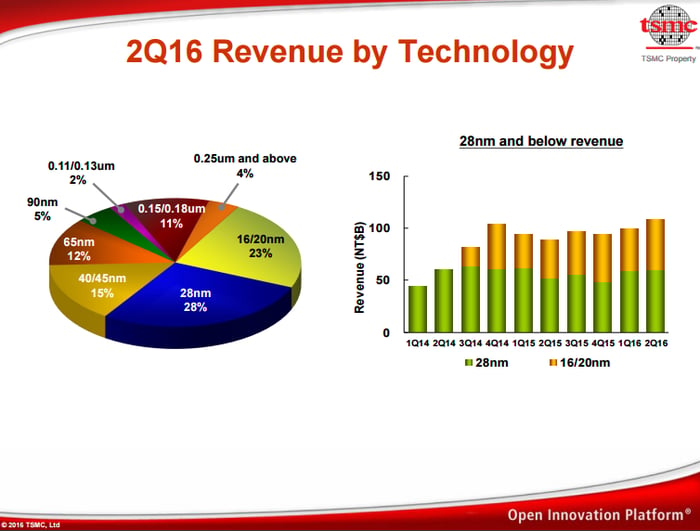 Even today, less than a quarter of TSMC's revenue comes from shipments of chips on its 16-nanometer and 20-nanometer technologies combined. This means even if TSMC is taking it on the chin with respect to the margins on those technologies (and TSMC has indicated that it takes a while for its latest technologies to achieve margins in line with the corporate average), the remaining 77% of its revenue can more than buoy overall gross profit margins.

At the end of the day, Intel's job is to build best-in-class products so that it can keep its average selling prices and market share in key product segments as high as possible. In some of its product segments, rapid adoption of newer manufacturing technology isn't imperative, but in others, it's absolutely critical.

By being more selective about the manufacturing technology on which it builds each of its products, Intel can improve its competitive positioning across the board, ultimately helping it maximize its revenue and profitability.