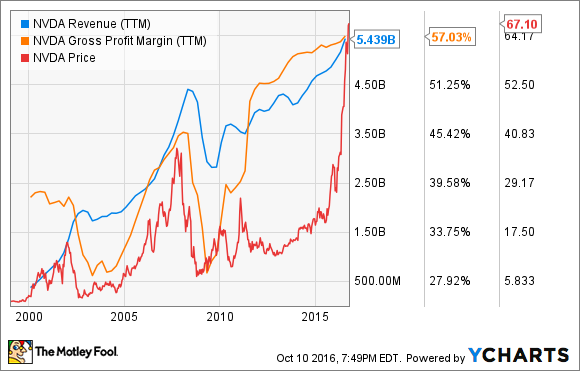 These four segments are all quite interesting, but the one I'd like to focus on here is the company's data center business. Here, NVIDIA sells high-performance processors, branded Tesla, that can be used to accelerate a large and growing number of mathematically intensive applications.

It's small, but growing very quickly

However, it's worth noting a couple of things. First, from fiscal 2013 through fiscal 2016, NVIDIA's data center business grew at a roughly 40% compound annual revenue growth rate, making it the second-fastest growing business in that period after its automotive efforts.

Perhaps more importantly, though, that growth rate appears to have accelerated during the first half of the company's fiscal year; NVIDIA's data center growth rates in the first and second quarters of the current fiscal year came in at 63% and 110%, respectively .

Should NVIDIA be able to keep these kinds of growth rates up, its data center business could rapidly become a substantial portion of the company's revenue base.

The products that NVIDIA sells in this segment are extremely lucrative. According to an NVIDIA investor presentation from last year, the company's data center products carry significantly higher gross profit margins relative to its corporate average: 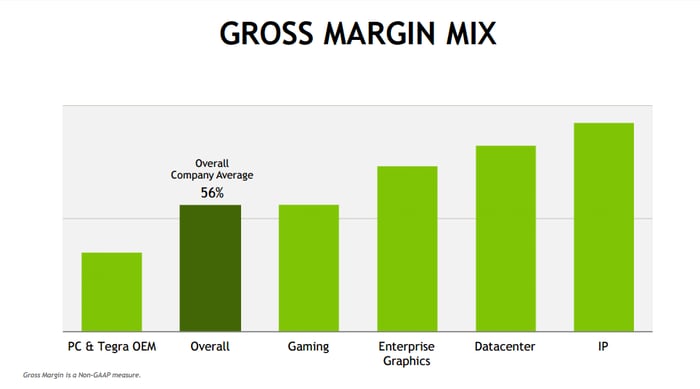 This means that if the company's data center business is able to outgrow its other businesses -- and based on the growth path it has been on over the last several quarters, this seems like a realistic assumption -- that growth should serve to push the company's overall gross profit margin upward.

Not just about supercomputers

Historically, NVIDIA's data center business had been largely concentrated in the supercomputer market. Over time, though, NVIDIA has managed to broaden the areas within the data center market in which its products could deliver a real value proposition.

In an investor presentation from earlier this year, the company talked about how the company's data center products can now address many different sub-segments of the broader high-performance computing, or HPC, market. NVIDIA highlighted areas such as finance, manufacturing, weather, and higher education as key target markets under the HPC umbrella.

Indeed, NVIDIA's long-term goal here appears to be to not just continue to do well in segments that have traditionally been amenable to NVIDIA's accelerator products, but also to actively expand the total addressable market for these products.

In an investor presentation last year, NVIDIA pegged its total addressable market within the data center at $5 billion. Should the company capture a substantial portion of that market, it could be looking at significant revenue and profit growth in the years ahead.