Much of the buzz around graphics specialist NVIDIA (NASDAQ:NVDA) these days seems to be related to its automotive efforts as well as its data center efforts. However, as important as those opportunities are to the company's long-term growth prospects, investors shouldn't ignore the company's gaming business.

For NVIDIA, this business primarily consists of the sale of specialized, high-performance graphics processors that go into personal computers to allow those computers to run graphically intensive video games.

Indeed, gaming represents -- by a large margin -- NVIDIA's largest business today and since it is still a growth business, it is likely to remain so for the foreseeable future.

With that in mind, here are three things that investors should know about NVIDIA's gaming efforts.

It's large and growing quickly

In NVIDIA's last fiscal year, its overall revenues came in at $5.01 billion. Its gaming-related revenues over that period were a cool $2.818 billion, or roughly 56.2% of consolidated revenues.

However, this isn't a large, but slow-to-no growth business that the company is milking for cash as it pursues other growth opportunities; rather, it's a business that has seen revenues grow at a roughly 30% compounded annual growth rate since the company's fiscal year 2013.

Back in 2015, NVIDIA showed the following image depicting the relative gross profit margins of each of its major businesses: 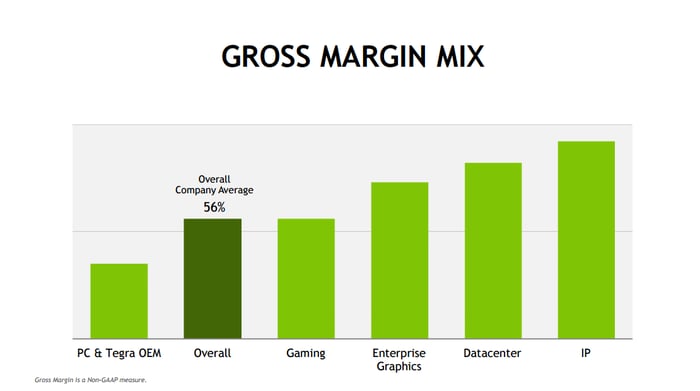 Though NVIDIA says that its gaming business essentially delivers gross profit margins right in-line with the company's overall average, that average these days is quite robust (the graphic shows that average at 56%, but that figure stood at 58.1% on a non-generally accepted accounting principles, or non-GAAP, basis in NVIDIA's most recent quarter).

It's what allows NVIDIA to pursue other business opportunities

All of NVIDIA's major businesses -- gaming, datacenter, automotive, and professional visualization -- rely on the core technologies that the company develops in service of its gaming business.

Note that NVIDIA's research and development spending in fiscal 2016 came in at $1.331 billion. Although this could be pared down some if NVIDIA's gaming business didn't exist, I believe a very large portion of this spending is used to develop the core graphics processor technologies that are used in all of its businesses.

If we remove gaming-related revenue from the company's fiscal 2016 results, we'd get a company that would have generated roughly $2.2 billion in revenue. Assuming gross profit margins stayed at around 58%, this would leave the company with just about $1.28 billion in gross profit for the year.

Assuming research and development spending of around $1 billion in a gaming-less NVIDIA, and other operating expenses of around $200 million (down from the $602 million that the company spent in fiscal year 2016), the company ex-gaming would be bleeding money.

Moreover, without gaming footing the bill early on, NVIDIA wouldn't have been able to afford to build up these non-gaming businesses to where they were in fiscal year 2016 in the first place.