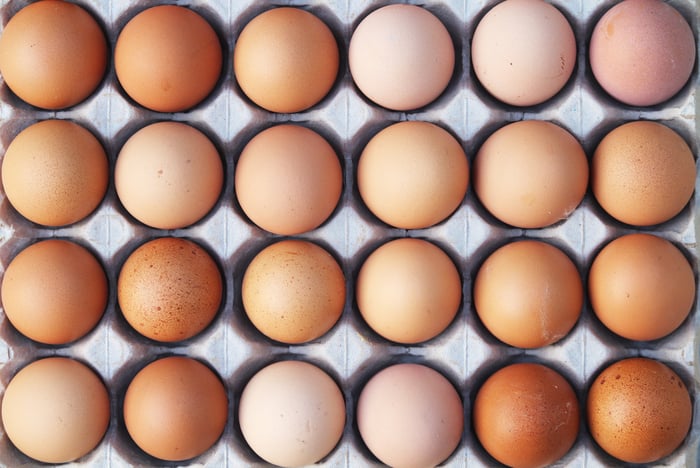 Shares were already trending lower in the weeks leading up to Cal-Maine Foods' quarterly report on Sept. 26. But they continued to slide after Cal-Maine confirmed that revenue had fallen by a whopping 60.7% year over year, to $239.8 million, which translated to a net loss of $30.9 million, or $0.64 per basic and diluted share, compared with net income of $143 million, or $2.95 per diluted share, in the same year-ago period.

By contrast, analysts' consensus estimates had predicted that higher revenue of $275 million would result in a narrower loss of $0.33 per share.

Cal-Maine Foods CEO Dolph Baker stated that the results "reflect a disappointing shell egg market with more challenging market conditions and significantly lower market prices" compared with fiscal Q1 of last year. Average selling prices fell 58% year over year from record highs a year ago, driven partly by a higher supply of shell eggs following disruptions caused by an avian flu outbreak in the spring of 2015. And while retail demand was solid, Baker also pointed to weak institutional demand for egg products as well as lower egg exports, which together pushed up inventory levels and exacerbated pricing pressures.

Moreover, Cal-Maine noted that a recent USDA Chickens and Eggs report shows an increase in chicks hatched that will continue to increase the size of the national laying flock. As such, shell egg supplies should continue to grow through the remainder of this calendar year, before a possible correction in early 2017.

In the meantime, Cal-Maine will wisely focus on operational efficiency and identifying "additional growth opportunities, including acquisitions." In theory, then, while Cal-Maine Foods may be in for more pain in the coming months, the company should emerge stronger for its efforts as these near-term headwinds abate.