Consumers around the world are increasingly conscious about the nutritional quality of the foods and drinks they consume. That's a major problem for many companies in the soda industry. According to data from Beverage Digest, per capita consumption of carbonated soft drinks in the U.S. fell to its lowest level in 30 years in 2015. However, you wouldn't have guessed it by looking at PepsiCo (NASDAQ:PEP), as the company keeps doing remarkably well in the face of industry headwinds.

Profit margins are also moving in the right direction. Core gross profit margin expanded 50 basis points, and core operating margin increased 30 basis points year over year during the quarter. On the back of growing revenue and expanding profit margins, PepsiCo reported a 7% increase in core constant currency earnings per share, while earnings excluding the impact of deconsolidating Venezuela operations grew 11%.

In a sign of confidence, management raised its earnings-per-share guidance for the full year 2016, from $4.71 to $4.78 per share. When excluding the impact from deconsolidating operations in Venezuela, management is anticipating a 10% increase in core constant currency earnings per share.

Rival Coca-Cola (NYSE:KO) will be repotting earnings for the third quarter of 2016 on Oct. 26, but data for the second quarter indicates that PepsiCo is doing considerably better than its main competitor. Coca-Cola announced a 3% increase in organic revenue during the second quarter, while global volume was flat year over year. For the full year 2016, Coca-Cola management is expecting a 6% to 8% increase in comparable currency neutral income before taxes.

However, when looking at dividend growth over the past decade, PepsiCo has substantially outperformed Coca-Cola. 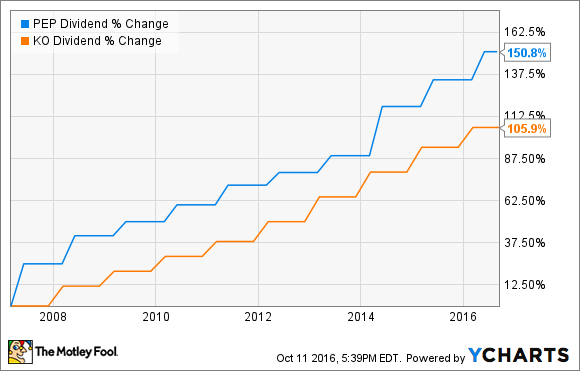 PepsiCo's strategy for success is not particularly complex or sophisticated. Product innovation is a key growth driver for the business, allowing PepsiCo to circumvent the decline in traditional soda sales and expand into healthier products. Management has been betting on healthy food and drinks for a long time, and this decision is paying off in spades.

Over the past decade, the company has reduced the average sodium in its food products by 11% per serving, and it has removed the average amount of saturated fat per serving by more than 15% in key global brands. PepsiCo is also reformulating its beverage portfolio to reduce added sugar, an important concern among consumers.

Nearly 45% of the company's revenue currently comes from its "guilt-free" portfolio of products, which includes diet drinks and other beverages that have fewer than 70 calories per 12 ounces, in addition to snacks with reduced levels of sodium. PepsiCo's "everyday nutrition" portfolio features food and drinks with positive nutrients, such as grains, fruits and vegetables, protein, unsweetened tea, and water. Approximately 27% of total sales is coming from everyday nutrition products.

Among other notable examples, PepsiCo's Sabra brand is enjoying vigorous growth on the back of increasing demand for products such as hummus, guacamole, salsa, and Greek yogurt dips. According to management, Sabra is now generating nearly $800 million in annual sales in the U.S., and it's on track to becoming a $1 billion brand.

Another promising growth venue is the Naked brand of fruit and vegetable juices made with all-natural ingredients and no added sugars or preservatives. Revenue from Naked products has doubled over the past six years, and the brand is already generating nearly $1 billion in annual sales.

Importantly, the company is achieving all this while cutting costs via productivity enhancements. PepsiCo has achieved $1 billion per year in annual productivity savings since 2012, and management believes it's well on track to saving an additional $1 billion in 2016.

Even a mediocre company can do well when the wind is at its back, but PepsiCo is producing rock-solid financial performance while facing considerable challenges from changing consumer habits in the food and drinks industry. This performance speaks volumes about the company's strengths and the quality of its management team